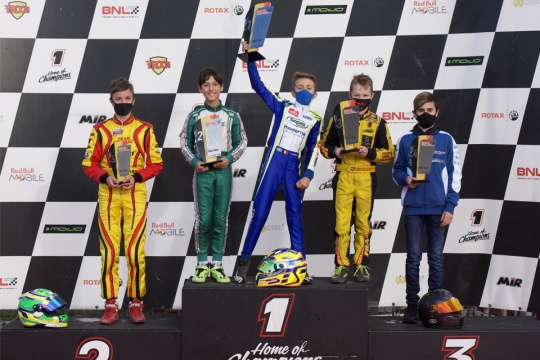 Author: Vroomkart International
The second round of the 2020 BNL Karting Series season made it’s return to Karting Genk, the “Home of Champions,” a mere two months after the exciting first race weekend of the season back in early August.
The customary weather micro-climate made an impact throughout proceedings during the two days of competition at the 1,360-metre circuit in the Limburg region, which saw over 80 drivers from almost ten different nations go into battle.
Even with the coronavirus pandemic restrictions limiting the total field to the numbers that were able to make the restrictions, it did not detract from the close-quarter action over the 20 races that took place.

Micro MAX: Max Sadurski would continue to lead the standings after Round 2 by 38 points, having tied on points with GKS Lemmens Power’s Mees Houben. However the former would take the weekend win on countback, having secured victory in both races on Sunday. Mats Van Rooijen would have a solid weekend and keeps third in the standings, ahead of Jake Menten, whose weekend went from great to mediocre over the course of proceedings.
1) Max Sadurski, 190 points; 2 ) Mees Houben , 152 points; 3) Mats Van Rooijen, 133 points; 4) Jake Menten, 102 points; 5) Boaz Maximov, 74 points; 6) Yenthe Moonen, 45 points.

Mini MAX: DAEMS Racing Team’s Thomas Strauven was the one to beat on home soil, taking three wins out of four over the course of the weekend, which keeps him at the top of the standings going into the final round by 23 points. Countryman Mateja Radenkovic from Bouvin Power would take second in the overall event results, as well as securing the win in the final race of the weekend to keep second in the leaderboard.
Reno Francot still is in the running, a further 23 points behind Radenkovic, but could have been in contention for being higher up the standings and weekend result, had the GKS Lemmens Power driver not suffered a technical failure on Saturday’s final race whilst battling as part of the top three.
1) Thomas Strauven, 181 points; 2) Mateja Radenkovic, 158 points; 3) Reno Francot, 135 points;
4) Nando Weixelbaumer, 99 points; 5) Thijmen Houben, 71 points; 6) Jasper Lenaerts - 69 points

Junior Rotax: The championship lead would change hands, as current Rotax Euro Trophy points leader Kai Rillaerts was able to win the event, and tie on points with JJ Racing team mate Lucas Schoenmakers from the Netherlands. However, the Belgian, who is on 135 points, would take the standings lead after securing a double win on Saturday that helped his chances towards the title.
Tim Gerhards from SP Motorsport is just a mere four points behind, taking a second and third place set of results to make it ultra-close going into the final race weekend of the season. Max Knapen would win the drama-filled finale by a considerable margin, whilst Jens Van Der Heijden would fight back during the whole weekend, even with transponder issues in qualifying, and take an emphatic third place in the very same race.
1) Kai Rillearts, 135 points; 2) Lucas Shoenmakers, 135 points; 3) Tim Gerhards, 131 points; 4) Christiaan de Kleijn, 78 points; 5) Max Knapen, 66 points; 6) Tom Braeken, 61 points

Senior Rotax: Sean Butcher would make it two weekend victories in a row in his BNL Karting Series campaign, made his efforts count at Genk, securing the standings lead by 42 points, ahead of the Netherlands’ Mike Van Vugt. Butcher would win an epic last-lap battle in the final race of the weekend, with Bouvin Power’s Milan Coppens stealing second on the final lap at the final corner, ahead of SP Motorsport’s Dreke Janssen.
Coppens would end up rounding out the weekend podium, which would move the Belgian up to fourth in the standings, one point behind team mate and countryman Luca Leistra, who now completes the top three overall ans took second overall in the weekend results.
1) Sean Butcher, 147 points; 2) Mike van Vugt, 105 points; 3) Luca Leistra, 78 points; 4) Milan Coppens, 77 points; 5) Lewis Gilbert, 73 points; 6) Andreas Hebert, 60 points

DD2: Defending champion Xander Przybylak would win the weekend result on countback, despite a clash between him and Bouvin Power team mate Glenn Van Parijs in the penultimate race of the event on Sunday put both of them out of contention for the win.
The Belgian showcased a champion’s drive in the last race of the meeting to take second, which saw an audacious outside overtake at the end of the Europalaan on Sebastien Degrande before the halfway point. France’s Paolo Besancenez would win the final race of the weekend, putting him on the final step of the podium, two points behind the two Belgians, as Van Parijs leads going into the final race weekend by 30 points ahead of Przybylak.
1) Glenn van Parijs, 157 points; 2) Xander Przybylak, 127 points; 3) Mick Nolten, 98 points; 4) Bas Lammers, 83 points; 5) Jarne Geussens, 77 points; 6) Paolo Besancenez, 70 points.

DD2 Masters: PKS Compétition’s Rudy Champion had an almost perfect weekend behind the wheel at the “Home of Champions,” as the #544 from France would take three wins during proceedings, putting him at the top of the podium, with a 34-point lead in the overall leaderboard.
Defending champion Carl Cleirbaut would showcase the form that took him to last year’s title, putting him second on the weekend result podium and promoting him to fourth overall. Briton Tamsin Germain battled her way to the final step on the rostrum and in the standings, as she now sits 23 points behind Christophe Adams, who finished fourth on the weekend, and now is second on leaderboard.
1) Rudy Champion, 161 points; 2) Christophe Adams, 127 points; 3) Tamsin Germain, 104 points; 4) Carl Cleirbaut, 95 points; 5) Tom Desait, 66 points; 6) James Beacroft, 61 points.