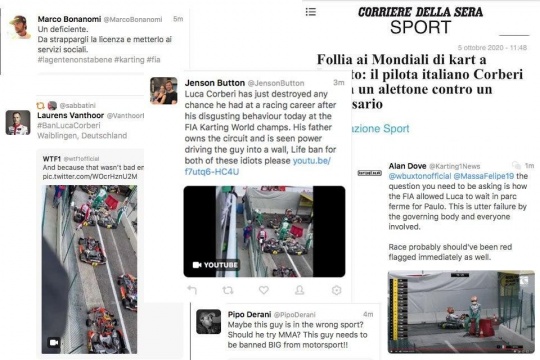 Author: Vroomkart International
Corberi was responsible for a double "reaction foul" after an accident with Ippolito during the final. An awful episode that has had worldwide reactions following the live streaming and sharing of the videos on social networks.
"He that is without sin among you, let him cast the first stone": a quote that does not need to cite the source, as we imagine everyone knows it. Well, frankly speaking, how many of us kart drivers have "felt their blood congeal" immediately after an accident in which, blameless, we were thrown out by another "unwary" competitor? We actually know very well that at that moment the adjectives that whirl inside our heads are quite something else in defining the opponent, and that if we had him immediately within reach he would certainly not end up with a pat on the back. But we are beings equipped with brains (some more, some less ...) and in the end, we rationalize things: unfortunately, accidents and misfortunes during a race happen to everybody. In short, as the British say "poetically", even at Oxbridge, "shit happens". Then maybe at the end of the race, we learn that it was a fatality or a mechanical problem, that whoever ran into us was in turn pushed by another, and maybe even comes to apologize immediately after the weigh-in ... And anyway it ends then and there.

On the other hand, what happened during the final of the KZ World Championship in Lonato, in this first weekend of October, cannot afford the luxury of not there not being any aftermath. We are still in the first laps, and in facing the first (fast) corner of Lonato, the contact between Luca Corberi and Paolo Ippolito takes place, leading the first to crash quite violently against the barriers. Ippolito would then be disqualified for this very accident, so Corberi might understandably feel he is a victim. Except that he was not satisfied with complaining or insulting his opponent: after moving his kart, he unhooked the nosecone, moved to the edge of the curve (among other things in a very dangerous position) and tried to hit Ippolito by throwing the nose at him. Among other things, missing him and hitting another driver instead… demonstrating, shall we say, his lack of clarity in his hotheadedness. Which does not mean that the reaction was not totally absurd in its danger: at that point the 125s drive past in full fifth gear and if a driver is hit directly by a nose you cannot know how it will end.

But that's not all. In the parc fermé, Corberi waited for the end of the race, without even taking off his helmet, and when Ippolito came back he threw himself at him. It was the beginning of a fight that also involved other people present (mostly to separate the two) and which also saw the parents of the two drivers on the "front line". We leave it to the readers to form an opinion on Corberi's double "reaction foul", which was however punished by the commissioners with disqualification (and further interventions from Cik-Fia are expected). In a more general perspective and leaving out for now the ethical/sporting aspect of the issue (not so much because it is laughable, but because we think there is very little to add) we must, unfortunately, highlight how in this case, unlike what would normally happen to us  "normal" kart drivers when get upset, to say the least, the case did not end there, on the track.

We are in the third millennium, for better or for worse, and above all there is the internet with all its annexes and related connections and links. Thus, there was first of all the live streaming, which showed the episode on the track to all connected fans, and from there it spread like wildfire in a flash. With the addition of the sequel, the fight in the parc fermé, thanks to filming via mobile phones. So in the blink of an eye the whole motoring world discovered that the KZ World Championship was being held in Lonato, but they learned about it for the wrongest reasons: too few words about Jeremy Iglesias' victory, and plenty of videos and comments on both of Corberi's intemperances. With loads of "dedicated" hashtags: #CorberiOut and #BanLucaCorberi!

It is useless to explain how all this did not go to the detriment of Corberi alone, but of karting in its entirety and, in many cases, of Italians in general, as if the other 14 drivers competing (or the Italian people as a whole) had also behaved the same way. In any case, sites that until yesterday did not even know that "go-karts" were motorsport, discovered its existence, reported and discussed it. But above all, there were also several established drivers who commented negatively, and often heavily, on what they saw in Lonato. From Andrea Bertolini to Marco Bonanomi or from Laurens Vanthoor to Pipo Derani (GT drivers, a category not really for "wimps") up to Jean-Eric Vergne, the negative comments have been endless on social networks like Twitter, FaceBook or Instagram; but among the most authoritative and harsh is the tweet by Jenson Button, who is certainly not a "hothead". After writing about "disgusting behavior" as regards the attached video of the post-race brawl, Button concludes with "Life ban for both of these idiots please" referring to both Luca and his father Marco.

Whether there shall really be further punishment will depend on the Cik-Fia and also on how Felipe Massa acts: the president of the federation, present in Lonato, was visibly altered after what happened, and we believe he will not overlook the damage to the image that the whole sport of karting suffered in consequence of the episode. There could be further sanctions and repercussions for the drivers and their respective parents (the Ippolitos were attacked, but then took part in the fight in response) but also, take note, for the official Tonykart and CRG teams. In fact, the two manufacturers appear as competitors having registered the two drivers, and for the sports justice bodies, the competitor is directly responsible (for fines or other) for the actions performed by their drivers. We will keep you informed if there will be other official news in addition to the "moral" position of ACI Sport, which with a press release expressed "firm condemnation" on the episode, reserving (we will see) further initiatives. 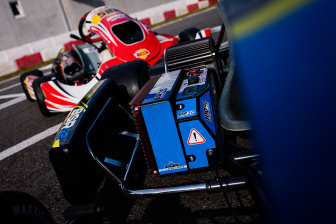