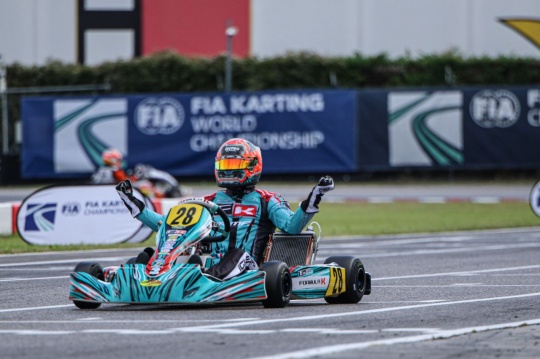 Author: Vroomkart International
The first World Championship in 2020 is now on file. Jeremy Iglesias is the new KZ World Champion, Simone Cunati makes KZ2 his own!
KZ - Iglesias on the roof of the world
The KZ Final was the most eagerly awaited race of the weekend in terms of value and spectacle. In addition to the episode between Corberi and Ippolito, which unfortunately stained the kermesse (described HERE), coming to the purely sporting side, Jeremy Iglesias brought home the Resurrection Title. The Frenchman had been struggling for several competitions but always remained among the best in his category with great merit. During the weekend in Lonato, characterised by the crazy weather and cold temperatures, the Formula K driver completed a race that meant victory and glory. Iglesias battled throughout the race with Kremers starting from second position, a clash between professionals in the sector with Iglesias called upon to take to the right waters to return to winning and convincing. First position overall and World Champion Title, according to the excellent Marjin Kremers (Ricciardo Kart) who almost missed the resounding one-two but still brings Birel Art on the podium, third the other eternal "kart boy", Bas Lammers on the second consecutive podium after 2019. Top five for Federer (SRP Racing) and Riccardo Longhi (Birel Art).

KZ2 - Cunati, you are the Champion!
KZ2 gave the usual show from the beginning to the end of the 25 laps of the race. Starting from pole position, the Modena Kart driver took advantage of the great race pace, but was attacked after the first laps by Carbonnel (Sodi Kart). The attack was immediately returned by Cunati, who was able to resume the lead of the race and then finally escaped, an escape favoured also by the clash behind him for the second position. Among the fighters, in the end it was Giuseppe Palomba (Birel Art) who was vice-champion, finishing in second position, completing a one-two of Birel Art chassis. Third position for the third Italian driver in the ranking, Giacomo Pollini for the NGM Motorsport colours. Pollini redeems the fourth place in 2019 managing to win the battle for the podium. A weekend to be rewarded also for Leonardo Marseglia (Birel Art), one of the youngest drivers in the fray and protagonist of a convincing weekend between qualifying, heats and race, fifth place for Danilo Albanese (KR) with 12 positions recovered compared to the start.