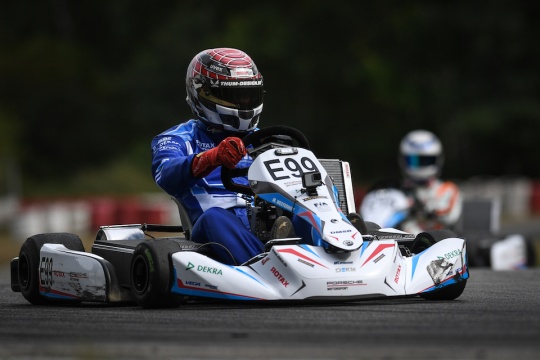 Author: Vroomkart International
Great show in Wackersdorf where the DEKM celebrated Round 2 and 3 of 2020 campaign.
After Kerpen's opening round, the DEKM moved to Wackersdorf to celebrate the 2nd and 3rd rounds of the 2020 season.

This is the 3rd campaign of the most electrifying karting series of the world, the first one celebrated with the brand new BRP-Rotax E20 kart. La Flamme and Stifter won the Round 2 races, while the guest driver Xen De Ruwe won both finals of the Round 3.

Luka Wlömer set the fastest lap on Saturday, and then he also won the Prefinal. In the Final, Axel La Flamme took the leadership and profited from the fight between Wlömer and Kerpen-final winner Joel Mesch to win. On Sunday, Wlömer was again the fastest after the qualifying practices but in the Final, Diego Stifter succeeded in taking the victory after a thrilling final.

Round 3 - The guest driver De Ruwe becomes a guest star!

Once again, the poleman, Joel Mesch, didn't win the final. In the first few meters, a contact gave to Xen De Ruwe, guest driver of the round 3 event, the chance to grab a victory in a very wet Prokart Raceland. Dry track, the same winner on Sunday: De Ruwe confirmed his pace and took another 1st place trophy.

The final of the German Electric Kart Championship at the Motorsport Arena Oschersleben is already waiting in three weeks. After that, it is clear who will finish the third season as champion and can look forward to being supported with a series of training programmes by Porsche Motorsport and a test drive in a Porsche Cayman GT4 with Allied Racing.