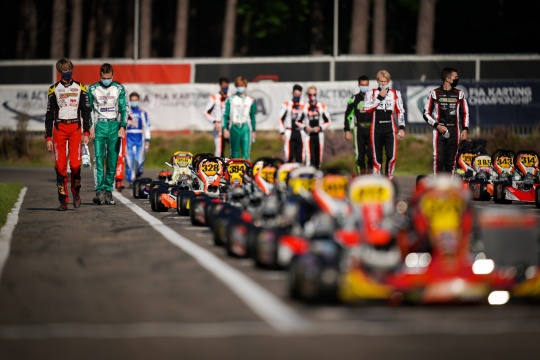 Author: Vroomkart International
The FIA Karting season of the premier class is also coming to an end, the World Championship will be held this weekend in Lonato.
For the second season in a row, "thanks" also to the changes in recent months, the most important weekend on the international karting scene will have an Italian passport. A worthy finale of a season as troubled as usual in the classes with the gearbox.

In the KZ it is the hunt for Marijn Kremers (Ricciardo Kart) and the rest of the Birel Art army, which heralds a frontal attack on the title. Kremers is already ready for confirmation, even though he is changing the colours but not the material, strong above all on the competitiveness already shown by winning the European Championship ahead of Alex Irlando. Just the Apulian is the second best suspect to close the Kremers era with the victory of the second Euro Series WSK race a fortnight ago. With Irlando, the 2019 Vice World Champion, Riccardo Longhi, overall winner of the Euro Series WSK and already on the ball on the Lonato track, completes the circle. A trio that will certainly have to deal with production heads such as Bas Lammers (Sodi), one of the most eagerly awaited and a man of great opportunities together with Simo Puhakka (Tony Kart) already competitive during the season. Lennox Racing will line up, as always, Matteo Viganò to aim for what would be a resounding success in the first year with the colours of Charles Leclerc, also thanks to the presence of Antonio Fuoco ready to return to karting at a high level for this weekend. In the list of suitors not to be underestimated are Stan and Jorrit Pex, Jeremy Iglesias (Formula K), Fabian Federer (SRP Racing), Lorenzo Camplese (SC Performance) and Paolo Ippolito (CRG).

At KZ2, the task of identifying a favourite is much more difficult, especially given the calibre and nature of a category that is uncertain right up to the end. Viktor Gustavsson will have his eyes on the Lennox Racing colours right from the start in terms of performance and the title he has just earned. The Swede, however, will have to face Simone Cunati (Modena Kart), already vice-Champion of Europe and the Birel Art couple, Giuseppe Palomba and Leonardo Marseglia ready to continue the battle of the "Red Army". After the recent feat in Genk, David Trafilov (SRP Racing) is also rightly one of the weekend's observers, thanks above all to the great process of growth under the guidance of the "captain" Federer. NGM Motorsport will line up Giacomo Pollini as the spearhead, restarting from fourth place last year, expected at the confirmations also Leonardo Bizzotto and Natalia Balbo, same speech for Paavo Tonteri (SC Performance) and Senna Van Walstijn (CPB).

We also remind you that the Lonato race will also award the title of Champion for the FIA Academy Trophy with Connor Zilisch (USA) first in the standings with 69 points.

Weekend live on our channels starting from Friday 2 October with qualifying then moving on to Saturday 3 and Sunday 4 October with the final phase composed as always of heats and category finals.