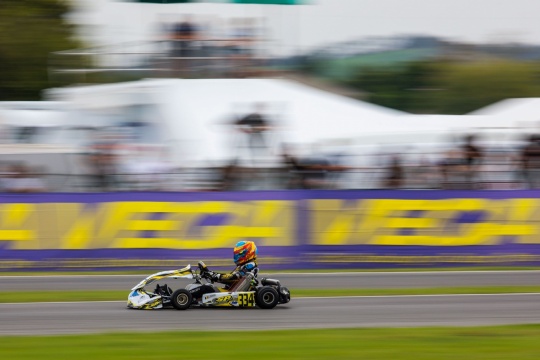 Press Release by: AG Media and Management
The Deutsche Kart Meisterschaft's third and penultimate act was an important test for Tom Braeken, who found himself facing ever-changing climatic conditions on the Wackersdorf track.
Unlike the European round placed here, when there was no rain, this time around the rain conditioned the day of qualifying and heats at Prokart Raceland.

On a slippery track, Braeken obtained P7 in his qualifying group, the 2nd, while in the two scheduled heats he concluded respectively P16 - due to a 5" penalty for spoiler release - and P8.

On Sunday, which was milder and without showers, luck however, turned its back on the young Belgian from SP Motorsport. In the first final, he was slowed down by a few inconveniences that did not allow him to go beyond P25, while in the second a 5-second penalty for spoiler release thwarted the comeback he had attempted, setting him back to 20th position.

Tom Braeken, SP Motorsport: «It was a weekend of ups and downs. I had to adapt quickly to climate change and grip, plus some mistakes and several unfortunate situations prevented me from maximizing potential. I leave Wackersdorf with an undoubtedly increased baggage of experience and with the knowledge that this will be useful to me already this weekend in the last act of the Academy Trophy.»

Tom Braeken's 2020 will continue this weekend at South Garda Karting in Lonato for Round 3 of the FIA Karting Academy Trophy.