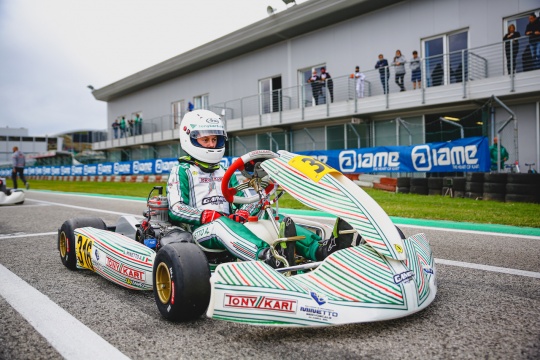 Author: Vroomkart International
A solid weekend for Gamoto Kart, engaged in the 4th round of the Italian ACI Karting Championship at the Adria Karting Raceway.
The Gatto family's team demonstrated competitiveness in all categories, confirming the positive trend of previous events.

Another positive weekend for Ludovico Busso, protagonist right from timed practice. After setting the 7th time in qualifying, the Italian driver did well in the heats on Saturday. In Race 1 he finished in 9th position, while in Race 2, despite the wet track conditions, he conquered the third step of the podium.

60 MINI GR.3 - Weekend of comebacks for Frey and Bogunovic

Ups and downs for Enea Frey and Aleksandar Bogunovic, authors of an excellent recovery in the two finals on Sunday. The Swiss driver, after a good qualifying ended in 5th position in the group, did not have an easy life in the heats, where he was involved in several accidents. Same fate for the Slovenian driver who, after an opaque qualifying, was forced to the repechage. By winning the latter, Bogunovic earned the start from 29th position in Race 1, finishing in 15th. Bad luck, however, for Frey, retired following a contact. In Race 2, Bogunovic climbed up to 10th, while Frey took 19th position after starting from the last spot.

Manuel Scognamiglio confirms himself at the top of the standings again this weekend. Thanks to the 3rd place in the group in qualifying, the Italian driver was constantly fighting with the leading group in the heats. Starting from 5th position in Race 1, Scognamiglio obtained another victory, consequently extending his lead in the general classification. In Race 2, on a wet track, after starting 8th for the inverted grid, he finished in 3rd position.

Despite good speed, there was no happy ending for Alessandro Minetto. The Italian, after 14th position in timed practice, was unable to move up in the standings. In the two races held on Sunday, the 18th position in both did not do justice to the potential expressed on the track.

Similar scenario for Giuseppe Guirreri, fast in free practice, but unlucky in the race. Having finished 14th in the group in qualifying, Guirreri was a victim of the two finals, which thwarted his efforts.

Complicated debut for Louis Leveau, conditioned by the variable weather. Following a qualifying where he ended in 21st position in the group, the Dane recovered in the heats with a good pace. In the finals, he finished in 24th and 19th position, respectively in Race 1 and Race 2.

Salvatore Gatto, Team Manager: “The weekend was very difficult, especially due to the variable weather conditions. The team did a great job, and the drivers also proved to have good temperament. There is still a lot of work to do, but we are moving in the right direction. Now a month full of events awaits us, for which we will have the opportunity to measure the path we are taking.”

The next appointment for the Gamoto team will be the Autumn Trophy, at South Garda Karting in Lonato.