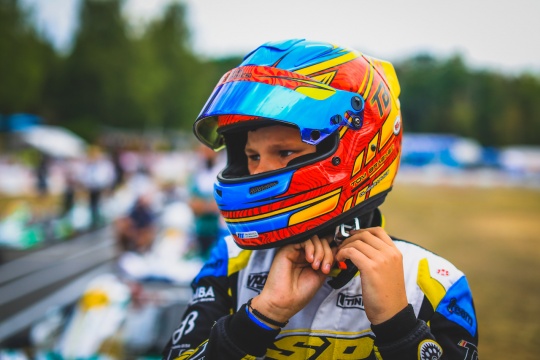 Author: Vroomkart International
Tom Braeken showed good progress in the double race placed last week at Lonato on the occasion of the WSK Euro Series, round 2 and 3.
At South Garda Karting in Lonato, Braeken immediately found a good feeling with the circuit, showing a good speed in free practices. Unfortunately, it was not the same in qualifying, which he ended in 27th and 28th group positions, respectively in rounds 2 and 3.

During the Heats, the SP Motorsport driver was not able to express his real performance on the track, due to several crashes in which he remained involved that forced him to retire.

Despite that, Braeken, thanks to a good performance in the Pre-final, managed to reach the Final of Round 3. With a comeback of 12 positions since the start, the weekend ended positively for him, in 24th position.

Tom Braeken, SP Motorsport: «The week was very tough, but I am happy with how it ended. The speed was there, but in the Heats I didn’t have the chance to show that due to the crashes in which I remained involved. Things luckily changed in the Round 3 Final in which I finally had the chance to show my real pace without being pushed out. I feel very improved, and this was possible thank to the efforts Stan and the entire SP Motorsport staff are making for me.