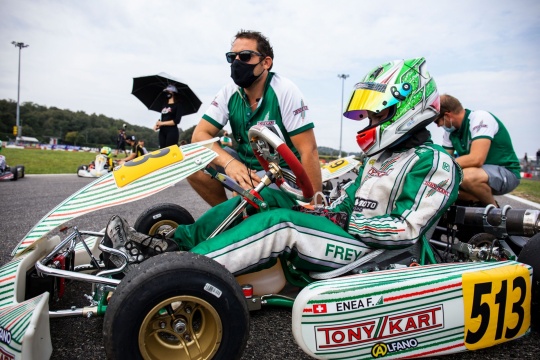 Author: Vroomkart International
Last weekend the double round of the WSK Euro Series took place at South Garda Karting, where the Gamoto team competed with Swiss driver Enea Frey.
On Thursday, dedicated to timed practice, the Swiss driver was unable to express his potential, finishing in 19th (Series 1) and 15th (Series 2) positions, valid for the 2nd and 3rd round respectively.

In the qualifying heats, Frey reversed the trend compared to Thursday, doing well; Frey, in fact, managed to move up in the general ranking. In the Prefinals held on Saturday, the Swiss driver gained access to both Finals, thanks to his 13th and 8th positions in the Prefinals relating to the 2nd and 3rd round.

Unfortunately, a few too many contacts did not allow Frey to crown the good work done in the heats, filing away Round 2 and Round 3 respectively in 23rd and 17th positions.

Salvatore Gatto, Team Manager: «The weekend was very demanding for the whole team, who worked hard to be competitive. We must not stop at the result to indeed evaluate the good things achieved by the driver and staff; I'm convinced that this week constitutes a good basis for future appointments.»

The next appointment for Team Gamoto will be the 4th Round of the Italian ACI Karting Championship, scheduled for this weekend at the Adria Karting raceway.