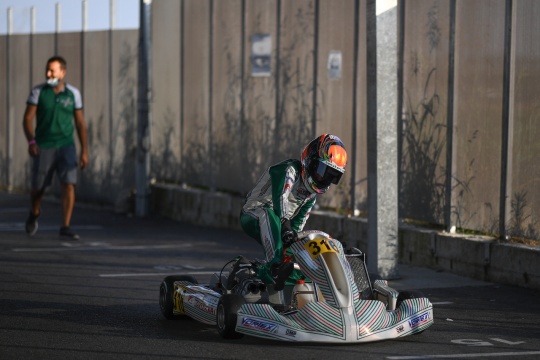 Author: Vroomkart International
Immediately after the final round of the FIA Karting OKJ European Championship, Maxim Rehm headed to Lonato to compete in the double race of the WSK Euro Series.
At South Garda Karting the activities officially started on Wednesday with the Qualifying Practices of Round 2 and Round 3. Rehm obtained the 7th and 14th position of the Group, which forced the German to implement a different strategy between the two events in the heats.

Some contacts and two bumper penalties overturned the result at the end of the heats, with Rehm further ahead in the ranking of Round 3 compared to Round 2. The same happened in the Prefinals; in Round 2 the German finished 15th, with 4 positions recovered, while in Round 3 he finished 10th.

Finally, in the Sunday Finals, Maxim finished 12th with a comeback of 7 places and a good performance in the Final of Round 3, while in Round 2 he was forced to retire after an accident in the opening stages.

Maxim Rehm, Tony Kart Racing Team: «I come from a very demanding period in terms of racing, which will continue with DKM this weekend. I feel I've developed, especially after the races in Wackersdorf and the double in Lonato. The speed improves; I just have to work on the consistency of the result. Having overturned the result from qualifying shows that the difficulties of the first heat did not affect me that much; clearly, I'd prefer staying in the front in both races but I'm equally confident of the work I'm doing with the Tony Kart team to make this happen.»

Rehm will be back on track this weekend in Wackersdorf for the 3rd round of the DKM.