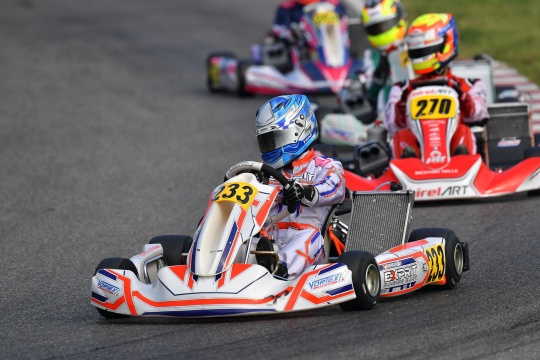 Author: Vroomkart International
The double round of the WSK Euro Series was the year's ﬁrst double appointment for Toni Naudé, who in Lonato had to face a week full of competitions, but at the same time very important in terms of competitive formation.
The week of racing got oﬀ to a good start with two qualifying sessions that saw her close to the top 10; in Round 2 she ﬁnished in 14th position less than 0.1 seconds from the top 10; in Round 3, instead, she set the 12th fastest time.

In the heats of Round 2, she obtained a 12th, a 14th and a 15th position, always "trouble-free". Unfortunately, the same did not happen in Round 3, where she was forced to retire in 2 out of 3 heats. The driver of the Exprit works team, after having competed in the Preﬁnals on Saturday, faced the Finals of both events on Sunday.

The native Swiss driver from Johannesburg, chosen by the FIA Women in Motorsport for the Girls on Track program, was unfortunately forced to retire in the round 2 Final after being involved in an accident, while in the Final of the 3rd round, held in the afternoon, she was the protagonist of a positive comeback which saw her ﬁnish in 25th place with an improvement of a good 8 positions. A result that could have been even better, had it not been for a contact which Toni was the victim of in the opening stages of the race.

Toni Kayla Naudé, Exprit Racing Team: «It has been a very busy week, both on a sporting and personal level. The double event required me to stay focused throughout the week. It was a great workout for my mind as well as for my driving skills. Both qualifying sessions went well which I am happy about because in the past races that was my weak point. I still have to work on consistency particularly in the long races.»

Toni Naudé thanks the Exprit Racing Team, OTK Kart Group, Vortex Engines and Karol Basz for their eﬀorts and support during this long week of racing.