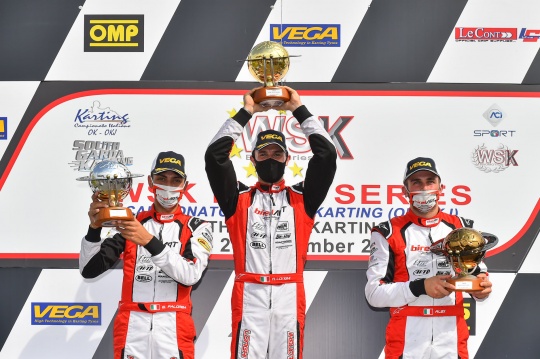 Author: Vroomkart International
The unprecedented double weekend Euro Series comes to an end with the assignment of all the titles up for grabs for the four categories.
KZ2 - Kremers and Irlando win the race but Longhi is the Champion
In the queen class, very high numbers those of the starters, especially considering the imminent World Championship in Lonato. After the double qualifying, the double heats and the double pre-finals, on Sunday in the Euro Series, the two finals animated the paddock. In the first race of the day, it was Marijn Kremers (Ricciardo) who immediately made things clear, starting better than Longhi (Birel Art), second, and running away to success, taking his teammate and Matteo Viganò (Lennox Racing) up four positions. In the second and last direct clash, valid for the title award, heavy absence for Kremers finished out in the pre-final the day before. Space then to Alex Irlando (Birel Art) perfect in managing the position for the whole race on Bas Lammers (Sodi) in great shape and Giuseppe Palomba (Birel Art). Despite the eleventh place, it was Riccardo Longhi who brought home the title of Champion ahead of Palomba and Irlando, authors of the Birel Art hat-trick.

OK - Antonelli perfect until the end
The Senior echoed the KZ2 for show and double final not at all taken for granted. In the first appointment in the morning, it was Andrea Kimi Antonelli (KR) who brought home the success keeping the first place from start to finish on Joe Turney (Tony Kart) and Juho Valtanen (Pantano), fourth Coluccio (Kosmic) with nine overtakes. In the second race, Turney manages to overtake the competition going to deservedly win the race ahead of Nikita Bedrin (Ward Racing) and Valtanen still on the podium. With the fourth place, Antonelli then put the title of WSK Champion and Italian OK ahead of Valtanen and Turney.

OKJ - Spina returns WSK Champion
The Junior has sanctioned the end of the Euro Series with two races and only one epilogue in blue. In the final of round 2, before the day, Ugo Ugochukwu (Sauber) thwarts all efforts with the early start which, in fact, costs him 10sec penalty and potential victory. Behind him it was Alfio Spina (Tony Kart) who made the difference by climbing three positions and triumphing ahead of Brando Badoer (KR) and Coskun Irfan (RFM). The second race of the day has then seen Arvid Lindblad (KR) keep the lead of the race and therefore the victory ahead of Alfio Spina, author of three more comeback overtaking and Brando Badoer with eight overtaking. Thanks to the double podium, Spina returns to win a WSK title ahead of Badoer and Cepil, the Sicilian also took home the OKJ Italian Champion title because of the double value of the first race of the day.

60 Mini - Nakamura and Lammers protagonists
Kean Berta Nakamura (Team Driver) is still the protagonist of the Mini universe managing to win the race valid for round 2 in front of two excellent opponents like Renè Lammers (Baby Race) and Kai Sorensen (Parolin) absolute dominator of the pre-final and the first part of the race administered in a perfect way. The second and last final of the day reserved other surprises with the victory of Lammers ahead of Kastelic (Team Driver) and Apicella (Team Driver). Disaster at the last corner in the fight for the podium that effectively cut off the excellent Sorensen again in the first positions. With the double result, Lammers won the Championship ahead of Nakamura and Przyrowsky.