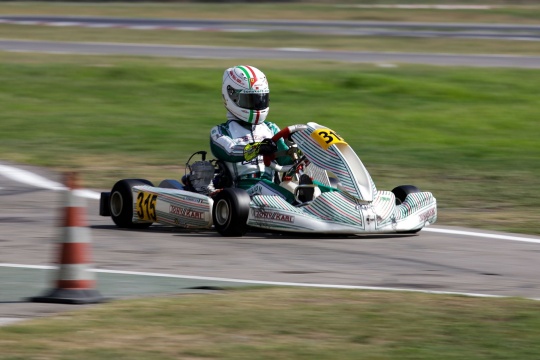 Press Release by: AG Media and Management
Half-full glass for Gamoto Kart at the end of the third round of the Italian ACI Karting Championship, on the Siena Circuit.
The Sicilian team, engaged in the IAME X30 categories, performed well, demonstrating good competitiveness.

Positive weekend for the Neapolitan driver, fast right from qualifying. Getting the second time in qualyfing, Scognamiglio  could start from the second position in the first race on Sunday. In Race 1 a contact relegated him to 8th position; thanks to the "first 8 position grid's inversion", Manuel started from pole position in Race 2. His great performance led him to victory, consolidating the leadership of championship.

Despite his speed, a complicated weekend for newcomer Giuseppe Guirreri. Qualifying, ended with the 28th time in the standings, didn't make things easy for him, in fact he was forced to recover in the eliminatory heats. In Race 1 a positive comeback was thwarted by a 5-second penalty due to a spoiler release, which relegated him to P29. Same fate in Race 2, a top15 finish thus out of reach.

Salvatore Gatto, Team Manager: “We had good speed in both categories, but, the too many contacts in the Junior and the penalties in the Senior, prevented us from obtaining everything we deserved. For their part, the drivers performed very well and I'm very happy about it.”

The next appointment for the Gamoto team will be the double round of the WSK Euro Series, scheduled for this weekend at South Garda Karting in Lonato.