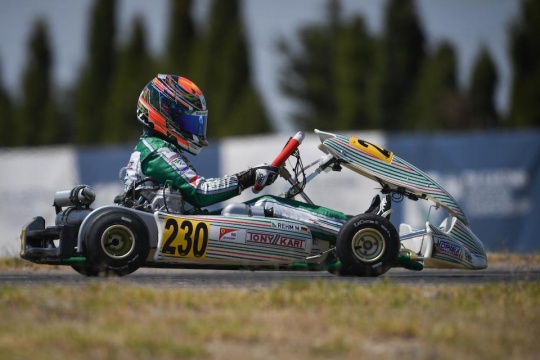 Press Release by: AG Media and Management
Maxim Rehm was close to join the Final in the 2nd act of the European Championship placed in Sarno.
Maxim Rehm came close to qualifying for the Final in the 2nd round of the FIA Karting OKJ European Championship which took place last weekend at the Circuito Internazionale Napoli.
In Sarno the German, after a troubled qualifying, was the protagonist of a significant turnaround in the heats. Saturday, a day entirely dedicated to heats, an accident kept him out of the top 10, brilliantly achieved in the other two scheduled races.
Thanks to a Saturday in fact positive, Rehm was on his way to an almost certain qualification for the Final. And on the field, in fact, the result had also arrived, thanks to the 14th position in the Sunday heat. The bumper penalty, however, pushed him back to P21 in the race classification and this was not enough to get back into the 36 finalists.
However, the step forward of the Tony Kart driver remains evident who, at his 2nd appearance in Sarno, showed good speed, confirmed by the splendid comeback of the 3rd heat also seasoned by the best race time.
Maxim Rehm, Tony Kart Racing Team: “The final result was not positive, but the weekend was encouraging. It was a completely different race than that of Zuera, the improvements are evident. I certainly feel closer to the goals I set myself and will continue to work in this direction to achieve them. A heartfelt thanks to Riccardo and all the Tony Kart Racing Team staff for their work.”

Maxim will be back on track this weekend for the 2nd act of the Deutsche Kart Meisterschaft programmed in Kerpen.