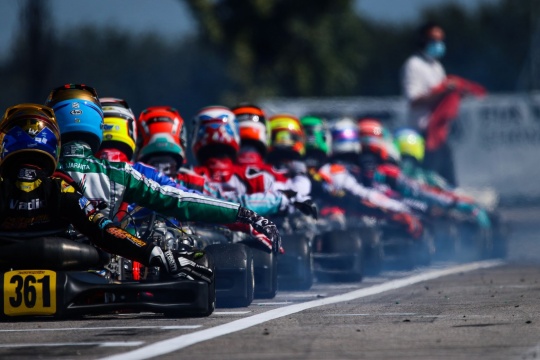 Author: Vroomkart International
The wait for the return to the track and for the races of international significance was not easy but finally, the sacrifice was paid off with the show weekend after weekend.
The one going into the archive a few days ago, was the first round of a European KZ and KZ2 Championship, as usual, highly anticipated and full of particular ideas that have upset some expectations and certainties that we had consolidated in the past season. To definitively conclude the practice and project ourselves to the second round in a few weeks, here are the report cards of the Adria weekend!

KZ
Irlando: 10
The Apulian does not need many comments and perhaps not even this report card, since the grade assigned to him is obvious, especially after such a weekend. Pole position on Friday, front row after the heats and victory after having hit the spot in turn 1, again against Puhakka. Wiped out 2019, now we need confirmation, for everything else we are! AVENGER

Puhakka: 9.5
The Finn deserves 10 but the wrong start which, in fact, costs him the leadership of the race lowers the vote. In any case, his is a weekend as a Champion, especially in front of much younger competitors but perhaps a bit less hungry than him. Talent is the good one, the older the better, like wine. “OLD” LION

Longhi: 7.5
The Vice World Champion starts among the favorites but, at least apparently, does not keep up with Irlando and almost ends up seeing his weekend compromised during the heats. Luckily on his side, among the best qualities, he has the good old comeback that they will probably teach the training camps as a “Longhi maneuver”, once again essential to eat the gap and also get on the podium more than deservedly. FIGHTER-BOMBER

Viganò: 8
On Sunday in Adria, Charles Leclerc himself was busy on the track in one of the most disastrous races of the year, it is not his fault that Charles like Viganò had to say goodbye to a noteworthy placement. The Italian recovers a performance that started on the sly with a qualification not to be repeated but between heavy foot and good material he manages to recover, to the point of undermining his friend Puhakka for the second position. Computer race behind Irlando, which ended just when Viganò had decided to attack the victory, technical problems yes but what bad luck ... UNLUCKY BUT PROMOTED

Kremers: 7
Okay the World Champion Title on your shoulders and let all the predictions pass, but returning to the sharks after having just adapted to the car is not for everyone. One could not ask for more of a Marijn Kremers who finished fourth one step away from the podium, perhaps defended in a too mild way, with these assumptions great things are expected. SURPRISE
KZ2
Gustavsson: 10 and praise
Veni Vidi Vici. A worthy synthesis of Viktor Gustavsson's first appearance in the Final of the last two years in Adria. Weekend as a hero, everything immediately, from start to finish always and only in front of everyone and then closed with more than six seconds of advantage. If the Swede is able to replicate in the second round as well, he could be the most deserved KZ2 continental title of the last three years. CANNIBAL
Cunati: 8
The Italian Champion starts very strong where already in 2019 he had performed the miracle in Germany, earning a place in the sun for the fight for the crown. An undertaking replicated with the support of the now Modena Kart reality, it is a pity that Gustavsson escaped too quickly. CONFIRMED

Palomba: 8
Same vote as Cunati's to confirm that they were practically the same person on the track. Giuseppe Palomba will probably be able to draw the rear of Cunati's kart freehand and eyes closed for all the time spent observing it, trying the decisive twist. If the rival was good at keeping him behind, Palomba was splendid not to make insane gestures that would have thwarted a substantial weekend in the second round key. Well but next time more aggression! SHADOW

Balbo: 7.5
On the home track, the girl from the NGM Motorsport team brings high colors to the team in a day that is perhaps a bit dull for her teammates. The only girl once again worthy of the category final especially for the path that allowed her to qualify. Third group time and heats closed firmly in the very first positions except for an unfortunate contact on Saturday afternoon, not to mention the second contact that compromised the race, just when she was fighting for the top ten. GIRL POWER

Pre-grid steward: 5
Report card referring to the sad weekend ending for Danilo Albanese. The Italian with absolute pole position and three heats won out of four could and certainly would have deserved to finish the weekend on the podium, despite the 13th starting position justified by a technical problem during a heat. In the control procedures before entering the pre-grid, however, the steward of the case created the misunderstanding and above all the fatal delay (10 seconds ...) which then excluded Albanese from the Final leaving him outside the entrance gate. An epilogue that leaves you stunned but that does not cancel the great ride of the rider. ALBANESE VOTE 8