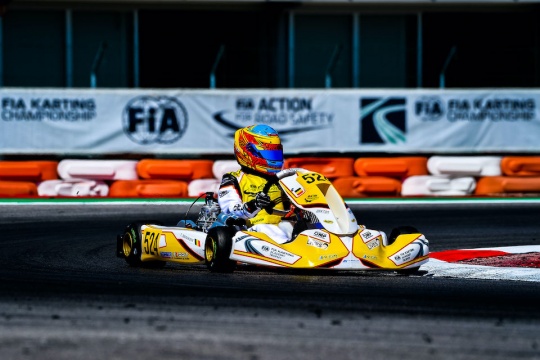 Press Release by: AG Media and Management
Tom Braeken had a positive weekend in the first round of the Academy Trophy despite the retirement in the Final due to a crash in which he remained involved.
The retirement in the Final of the first round of the FIA Karting Academy Trophy certainly does not do justice to the potential shown by Tom Braeken during the weekend.
The Belgian driver, in fact, despite being among the youngest present and above all among the category's least experienced, was however consistently among the fastest of the lot. Right from the first Free Practice, Braeken gave the impression of being able to contend for an important result and so it was also in qualifying, where he finished 3rd in his group and 8th overall. His journey continued in the heats, where he obtained 3 top5 results (2nd, 4th and 3rd).
Starting from the 3rd row in the Final, a contact after a few corners unfortunately forced him to surrender.
Tom Braeken, Belgium: «It was a very positive weekend, despite the retirement. Judging the race taking into consideration only what happened, would be wrong and unfair. Despite my lack of experience with OTK material, I was still in the game; with a little luck we would certainly be talking about something else. In any case, it's already time to turn the page and prepare for the next appointment, the 2nd round of the DKM.»
Braeken will be back on track in two weeks for the DKM Round 2 programmed in Kerpen.
© photo: Sportinphoto, editing: M. Perrucca