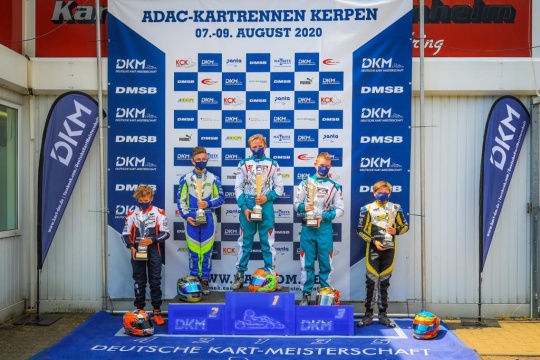 Press Release by: AG Media and Management
After the bronze medal in the BNL, Tom Braeken continued in his positive period also in Kerpen.
The young Belgian made his first appearance in the prestigious Deutsche Kart Meisterschaft last week in the opening round of the 2020 racing season that was celebrated in Kerpen.

After being the fastest in the free practices, he set the 3rd fastest lap in his Qualifying group. Unfortunately he was in the slowest group and this means that he was forced to recover in the heats.

Despite Kerpen is one of the most difficult track for the overtakes, Braeken had a positive series of heats, in which he finished 2 times in 6th place. Started from row 8 in the Final 1, he crossed the finish line in 7th position.

In the second Final he closed P5 that means podium for the DKM rules.

Tom Braeken, SP Motorsport: “I’m overall satisfied with the pace I showed. I worked so hard with the team and the results arrived, this makes me so confident also for the future. I’m just a little bit disappointed for being in the slowest Qualifying group, but that’s part of the game, I’ll have more luck next time”.

For the third weekend in row, Braeken is on track. Now it’s time for Adria, where Tom will defend Belgium’s colours in the FIA Karting Academy Trophy.