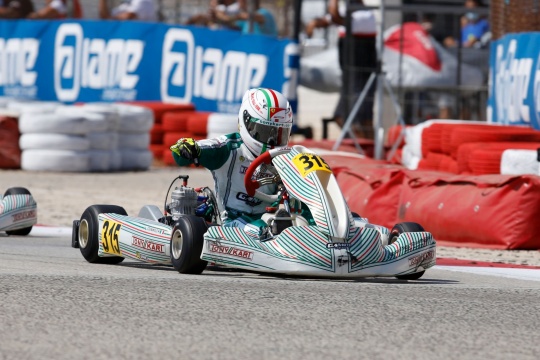 Press Release by: AG Media and Management
In the "home track" of Triscina, the first round of the Campionato Italiano ACI Karting has smiled at the Gatto family team, on the podium in the X30 Junior category.
60 Mini GR.3 - Bugonovic fast but unlucky

Weekend of ups and downs for the Slovenian driver, also thanks to the lack of experience on the Sicilian circuit. In qualifying, he encountered traffic during his flying lap, finishing in 19th position. In Race 1, some contacts relegated him to 21st place. In Race 2, Aleksandar expressed his true potential, finishing in 13th position and making many overtakes.

A concrete weekend for Ludovico Busso who, after a good qualifying finish in 6th place, confirmed himself in the top positions in the heats, conquering the start from 5th place in Race 1. Unfortunately, in the latter the Italian driver was involved in a contact, which relegated him to 15th. In Race 2, a great pace allowed him to recover up to 7th position.

X30 Junior - Scognamiglio scores a double, Minetto on the rise

Manuel Scognamiglio, after an unlucky qualifying, was the protagonist since Saturday. In fact, the Neapolitan driver recovered up to 3rd position. This allowed him to take home the victory in Race 1. In the second race on Sunday, despite starting from eighth place by reversing the starting grid, Scognamiglio made his way through the field again until he took the leadership which he then maintained to the chequered flag.

A weekend uphill for Alessandro Minetto, despite a difficult start. The Italian driver, after a complex qualifying ended in 15th position and a retirement in Race 1, in the second race on Sunday, did well, recovering up to eleventh place.