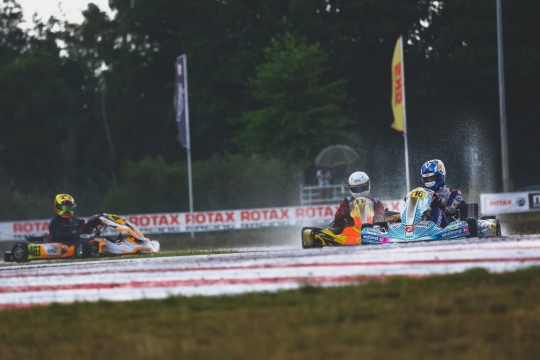 Author: Vroomkart International
The RMCET arrives at the epilogue on the Genk track with all the category finals.
A never predictable weekend rewarded the great show offered by the Euro Challenge Rotax schedule with the final races of the day for all categories in Belgium.

DD2
In the first DD2 final, the result awarded Austrian driver Manuel Tenschert (KSB Racing) victorious ahead of Nicolas Picot (Daems Racing) and Glenn Van Parijs (Bouvin Power) in second and third place respectively. In the second and final final of the day, it was Van Parijs who overturned the result and managed to win ahead of Sila Rytter (RS Competition) and teammate Mathis Lund (RS Competition), on the podium.

Junior MAX
Between the ranks of the Junior MAX, home rider Kai Rillaerts (JJ Racing) maximized the starting position and also took home the first race with almost two seconds ahead of Nick Gerhards (SP Motorsport) and Tim Gerhards (SP Motorsport) . Race 2 was again a race that saw Gerhards as protagonist, Tim was able to win and excel in front of an unstoppable Rillaerts, however, second in front of William Macintyre (Sodi Vitesse), third.

Micro MAX
In the little ones it is a celebration for the GKS Lemmens Power men thanks to Mees Houben winner of the race ahead of Jake Menten and Dragos Avasilcutei (KSCA Sodi Europe). In Final 2 there is also a double for Houben, extraordinary protagonist ahead of Max Sadurski and Zdenek Babicek (Tepz Racing Team) in second and third place.

Mini MAX
If in the Micro MAX they had dominated, even in the Mini MAX the guys GKS Lemmens Power left nothing to chance, also winning with Taym Saleh in race 1 ahead of Karel Staut (PG Motorsport) and Thijmen Houben (GKS Lemmens Power). Saleh double in the second race that brings Vidmar Aljaz (Sportstil akk) and Mateja Radenkovic (Bouvin Power) behind him.

Senior MAX
The long-awaited Senior MAX then closed the dance with a heart-pounding Final 1 that broke the spell of the previous days seeing Dylan Lahaye (GKS Lemmens Power) winner to the delight of his team with over seven seconds of gap inflicted on Sean Butcher (KR Sport) and Mads Riis (Daesm Racing Team) on the podium. In the second final of the day Lahaye even makes a double, increasing the gap to ten seconds, an absolute domination for the Belgian driver who celebrates in style on his home track. Second place for Storm Broer (SP Motorsport), third place for a great Mathilda Olsson (Strawberry Racing), protagonist of the whole weekend.
FULL RESULTS