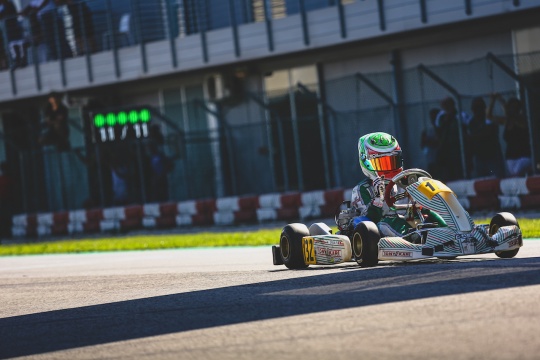 Press Release by: AG Media and Management
Positive weekend for the Gamoto Kart Team, which in the IAME Series Italy confirms the good job done in the Trofeo D’Estate.
X30 MINI - Frey again on the podium, Hoogendorn a positive debut

Another star weekend for Enea Frey, who showed great potential right from the qualifying sessions, marking the second fastest time. In the final, after a race constantly at the top, he crossed the line in P2 in a photo finish.

A good debut for newcomer Dean Hoogendoorn who, after a P5 in qualifying, repeated himself in the final remaining in the top 5.

A good weekend for the Neapolitan driver Manuel Scognamiglio, author in the final of an excellent recovery with a series of fast laps, up to the 5th position, despite the unsatisfactory qualifying sessions.

Good debut in the Junior category for Oleksandr Bondarev who in qualifying obtained an encouraging 7th position in the group, which allowed him to lay down the solid foundations for a series of positive elimination heats. In the final, a few too many contacts relegated him to 14th position.

Double-faced weekend for Alessandro Minetto, who in the final had to deal with an accident, from which fortunately he did not report any physical consequences. The Italian had started very well since qualifying, marking the seventh group time.

Salvatore Gatto, Team Manager: “This weekend the team's worked really well, despite the pressure of fatigue due to the many consecutive races. The second consecutive podium shows how much the hard work is paying off.”

The Gamoto team will be engaged in tests at the Triscina International circuit this weekend to better prepare the first stage of the Italian ACI Karting Championship.