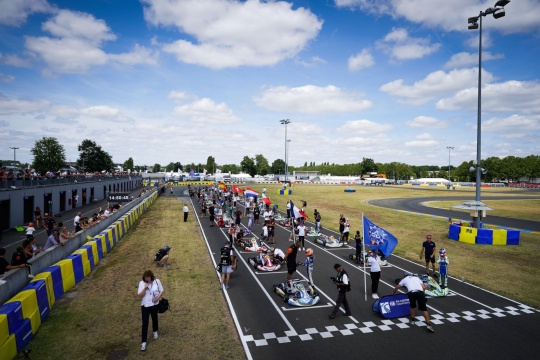 Author: Vroomkart International
The European Championship OK and OKJ finally comes to life on the weekend on the Spanish circuit of Zuera!
In 2019 the month of July meant the end of the European Championship and the start of preparation for the World Championship, in this strange 2020, the European is ready to start from the "day one" on the Spanish track of Zuera, already protagonist two weeks is for the Champions Of The Future by RGMMC preparation stage.
The circuit in the province of Zaragoza returns to the calendar after several seasons, a track with tortuous curves where, most likely, high temperatures will dominate making the competition even more uncertain for two historically fought categories.
OK - Bagarre for the crown of Travisanutto
In 2019 the man to beat was Lorenzo Travisanutto, author of a practically perfect path. Since that victory on the Le Mans track, there are many aspects that are currently different, starting right from the current champion passed to the Tony Kart court. Despite a suboptimal start, the Italian remains among the favorites, as well as comrade Pedro Hiltbrand ready to return great and Joseph Turney to close the "white-green" trident. In the new entry list, headlights focused on the blue promise Andrea Kimi Antonelli, already at ease in the category despite the rookie year, now pure formality. Almost the same speech for Thomas Ten Brinke (RFM), reigning OKJ World Champion, Nikita Bedrin (Ward Racing), Harry Thompson (Sauber Karting Team), Juho Valtanen, Jamie Day (Lennox Racing), Dilano Vant Hoff and Rafael Camara ( Forza Racing), Luigi Coluccio (Kosmic) and Taylor Barnard (Rosberg Racing), all already protagonists of the first races of the year and possible contenders for the title. Entry list rather varied and ready to deny the predictions of the debut as often happens, starting from the "home" favorites such as the Spanish pilots who want to take the opportunity on the fly, led by the man CRG Genis Civico without forgetting names like Maya Weug (Birel Art) and Josep Martì.
The weekend program will start as usual from Friday 31 July with free practice and qualifying, Saturday 1st August entirely dedicated to the category heats, closing Sunday 2nd August with the first Final of the season.
OKJ - An armchair for ... many!
The OKJ platoon is even more difficult to decipher at the seasonal debut, many hot names and as many possible last-minute twists. The European Championship will certainly start from the legacy left by Marcus Amand, winner of 2019 and newly promoted to Senior. Therefore, keep an eye on the great return of Tuukka Taponen, already winner of the debut race of the past season and now the official Tony Kart face. In addition to the Finnish, the wait for the Kart Republic army led by Stenshorne is great, albeit with the colors Rosberg Racing and Arvid Lindblad, expected favorite given the great start of 2020 together with Ugo Ugochukwu and Freddie Slater (RFM). For Italian colors Alfio Spina will try to aspire to the title, the same speech for Brando Badoer. On the opposite side, Birel Art is ready to respond with Tymoteusz Kucharchczyk and Cristian Bertuca, among the major outsiders Irfan (RFM), Rehm (Tony Kart), Powell and Fluxa (RFM) make their way.
Also for the Junior, open battle from Friday of free practice through Saturday of direct clashes, then arriving on Sunday of competition.
ENTRY LIST AND REGISTER HERE.
S.C.
Credits: FIA