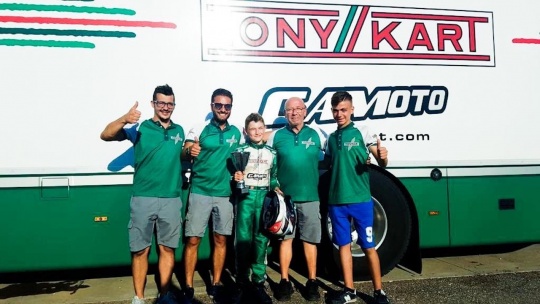 Press Release by: AG Media and Management
Despite the high temperatures, the Gamoto team did not disappoint expectations at the South Garda Karting in Lonato.
Frey close to victory

Enea Frey, after two races of ups and downs, is back among the positions he's meant for. The Swiss driver, after a qualification ended in 3rd position, ran for the final victory thanks to a noteworthy pace in the heats. In the final, after a more conservative first phase, he expressed a good rhythm, finishing second under the checkered flag.

Another race in crescendo for Cristian Blandino, who despite a difficult qualification, did not give up and reacted positively. In fact, in the final, the Sicilian driver recovered up to 21st position, although he started from the back of the grid.

Salvatore Gatto/Team Manager: “It is always an emotion to see your own driver on the podium, which shows the excellent work done by the team during the entire weekend.”

The next round of the Gamoto team will be the second round of the IAME Series Italy, scheduled this weekend on the Adria circuit.