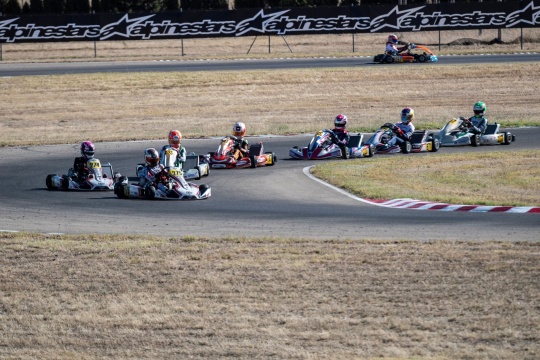 Author: Vroomkart International
The competition comes to life on the track of Zuera with today's rich program of heats.
On the Spanish circuit, the Champions Of The Future anticipates the show of the FIA ​​European Championship with four categories on the track.

60 Mini - There is only Matveev
The Russian from the Energy team doesn't miss a single shot on Zuera's Saturday. Three wins out of three heats available that mark a clear path so far and pole position for tomorrow's pre-final. In second place, still the Japanese Kean Berta Nakamura (Team Driver) with the solid and correct consistency ended with three second places to secure the second position. On the virtual podium we find Mark Kastelic (Team Driver) with two thirds and a fourth place, closing the top five Adam Hideg (Kidix) and Costoya (CRG). Pre-final for tomorrow scheduled at 11.10.

OKJ - Cepil grabs the pole
Igor Cepil snatches the titles on Saturday night thanks to a good performance made up of three wins and a fourth place, more than enough to finish at the top of the group and on pole for tomorrow morning's pre-final. Behind Cepil, Coskun Irfan (RFM) defends himself well with two wins, one fifth and one seventh place too much to hope for in the first box, third Arvid Lindblad with two thirds, one second and one fourth place. In top five we also find the first Birel Art by TImoteusz Kucharczyk and Martinius Stenshorne (Rosberg Racing) in P4 and P5 respectively.

OK - Valtanen continues on the straight path
After yesterday's pole, Juho Valtanen (Pantano) continues his ride towards success bringing home two wins, a third and a second place in the four heats available. Pole position therefore ensured for Valtanen who will have to watch his back from the first home Lennox Racing driver, Jamie Day in second place with two victories. Third place for the first Italian Andrea Kimi Antonelli with three second places, fourth Norton Andreasson and fifth Nikita Bedrin with two victories and a second place, "stained" by an unfortunate first heat.

KZ2 - Perfect Ippolito
The queen class closes the program with the domination of Paolo Ippolito up to here for the joy of CRG colors. Three wins out of three for the Italian in pole position for tomorrow's pre-final, according to Brad Benavides (CPB) and third Daniel Vasile for the DR Srl colors.

PROGRAM AND RESULTS OF THE WEEKEND