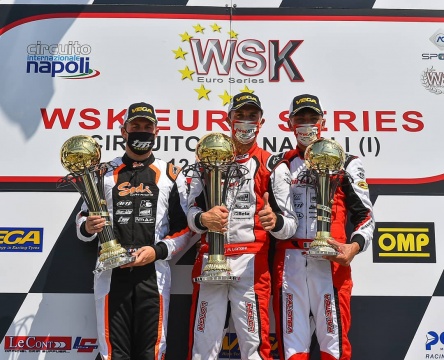 Author: Vroomkart International
Afternoon of fights at the Sarno track with the category finals. Longhi (KZ2), Gray (OK), Spina (OKJ) and Nakamura (60 Mini) win.
The Sunday of the Naples International Circuit ends with the pre-final and final program and the first winners of the new WSK Euro Series.

KZ2 - Longhi & Birel Art without rivals
That Sarno was the right weekend to return to winning, Riccardo Longhi and his companions had understood immediately. A round of applause for the Italian that began yesterday with the last heats available and completed today with the victory in the pre-final, the consequent pole position and finally the victory in the final administered from start to finish. Down the hat for the Birel Art Vice World Champion, leader of the ranking and highly anticipated name for the rest of the season. Adrien Renaudin (Sodi Kart) returned to levels of a certain thickness also completes the podium if we also count the pole on Friday. The Frenchman reassembled two positions from the start and then surrendered to Longhi's power. Third place and bronze medal for the second of the "reds" of Lissone, Giuseppe Palomba who kept the starting position closing on the podium at home. Top five sanctioned by Simo Puhakka (Tony Kart) and a newfound Jeremy Iglesias (Formula K).

OK - Gray in seventh heaven
The colors of Charles Leclerc have a new interpreter in OK and responds to the name of Oliver Gray. The Lennox Racing Team flies to the top of the standings with the British driver, more than ever dominant throughout the weekend. Pole position, first after the heats and first also after the final, a result of absolute depth that throws the English among the favorites of the moment. Who remains favorite is always Andrea Kimi Antonelli, first of the Italians and true "terrible rookie" of the season with five positions reassembled up to the second place in the premier class of the direct catch. The Bolognese convinced for consistency and consistency after returning from a difficult period, a speech practically similar for a great Juho Valtanen (Pantano), already a protagonist in the now distant Finnish World Cup and again at the top with four laps in the lead before having to surrender to Gray. Fourth place for Dilano Vant Hoff (Forza Racing) with five overtaking assets, fifth Matheus Morgatto (Parolin). The penalty for the front spoiler imposed on Barnard (Rosberg Racing) went from fourth to sixth, out Camara and Travisanutto.

OKJ - Alfio Spina is back
Alfio Spina returns to victory in OKJ after the start of the season with two consecutive victories on the Adria track. The Sicilian returns to success in a big way, starting from where he left before the quarantine. Winning weekend for Spina built shot by shot until the final today where after just one lap he had already taken up the four useful positions to place himself in front of everyone. The fight with teammate Igor Cepil was nice, second at the finish and constant on his weekend but not enough to win. He does not take advantage of pole position but the second Finn, Tuukka Taponen (Tony Kart), gets on the podium, more than ever relaunched by the change of team. In fourth position, Brando Badoer ended his positive weekend, author of a comeback of six positions after a not perfect pre-final, demonstrating once again competitiveness and race pace, fifth Freddie Slater (RFM).

60 Mini - Nakamura at the last breath
After the domination of Dmitry Matveev (Energy) in previous races, a good Kean Berta Nakamura (Team Driver) seemed to have taken off for a new domain. A scenario that manifested itself until the pre-final today but not so obvious in the 60 Mini final. Breathtaking fight between the two new interpreters of the cadet class with three exchanges of positions until the last lap where Nakamura had the better of Matveev, launched towards yet another success. The Russian still finishes second with three reassembled positions, third Jan Przyrowsky (AV Racing). Nine positions reassembled by Guillaume Bouzar (Parolin) in fourth place, fifth Thijs Keeren (Pantano). The favorite Maciej Gladysz (Parolin) is out in the pre-final.

The WSK season is back on pause with an appointment for the second double weekend of the season, this time in Lonato, from 14 to 20 September with the Euro Series grand finale.