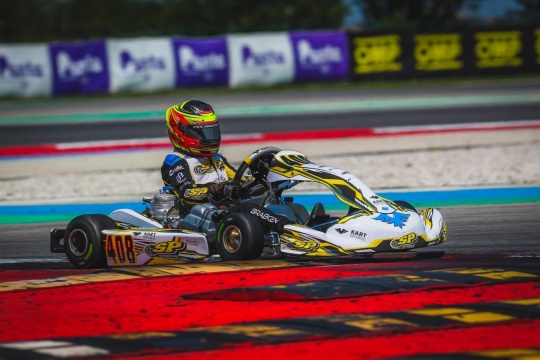 Press Release by: AG Media and Management
Adria's long week coincided with Tom Braeken's debut in OKJ.
The SP Motorsport standard-bearer, after dedicating the winter and the first part of the year to the Junior MAX by Rotax competitions, changed his plans by deciding to focus more on international competitions.

And so, at the Adria Karting Raceway, on the occasion of the last two rounds of the WSK Super Master Series, Braeken stepped on the stage of the WSK Promotion for the first time. With initial difficulties set aside and overcome, the Belgian driver qualified on both occasions in the Final; in the first of which he closed 26th with a comeback of 4 positions. An unfortunate inconvenience, however, deprived him of the joy of the finish line on Sunday.

Tom Braeken, SP Motorsport: "What a thrill to race in the WSK races in Junior. I missed that atmosphere. Despite the heat, despite the number of sessions to be completed, I'm satisfied with having achieved the goals we set ourselves at the beginning. I really want to thank Stan, Richard and Hernan for their work."

It is already time to get back on track for Braeken, who this weekend will be engaged in the first act of the WSK Euro Series at the Naples International Circuit.