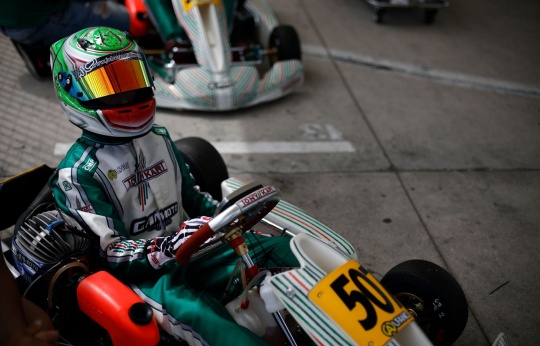 Press Release by: AG Media and Management
At the Adria Karting Raceway, despite the heat and a higher difficulty rate due to the double appointments scheduled, the Gamoto team drivers gave it all, fought hard.
Bondarev and Frey fast but unlucky

Good speed for Enea Frey throughout the weekend, frustrated by a few too many contacts at crucial moments. On the occasion of the third round, after an excellent qualifying ended in 9th position in the group, in the prefinal Frey had to raise the white flag in the very early stages. In fact, following a chaotic departure, the Swiss driver suffered a contact that forced him to surrender.

In the fourth round he conquered 11th position in qualifying (GR3), before ending the final in 16th.

Similar scenario for Bondarev who showed good pace in the 3rd round, obtaining the 12th position in qualifying (GR2). After finishing the pre-final in 14th place, the Ukrainian driver gained as many as 11 positions, crossing the finish line in P17 in the final.

Unfortunately in Round 4, luck was not on his side; due to an accident in the heats, Oleksandr had to start from the back in the prefinal, unable to access the final.

Blandino in crescendo at debut

The young Italian driver, in his first race on the WSK stage, performed well, despite his young age. In both rounds, although he was unable to enter the finals, he showed great determination.

Salvatore Gatto, Team Manager: «This week's been very hard for the whole team, both physically and psychologically. I'm satisfied with the attitude of our drivers and we're confident in view of the forthcoming races.»