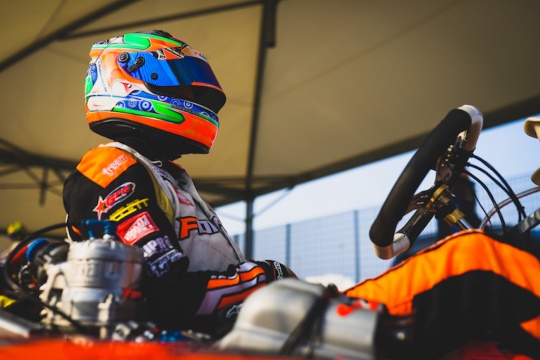 Press Release by: AG Media and Management
Overall positive results for Gilles Stadsbader after Adria's "double feature".
On the track located in the province of Rovigo, the Forza Racing driver participated in the double-header of the last two acts of the WSK Super Master Series, which in 6 days played out the remaining rounds of the championship.

Stadsbader was the protagonist of a weekend in crescendo, despite not feeling at his best because of his height, but did not suffer the physical decline due to the high number of sessions in which he took part. Both in Round 3 and in Round 4 Final Stadsbader closed in 25th position, although in the first of the two he had crossed the finish line in 24th, but then he received a bumper penalty.

Gilles Stadsbader, Forza Racing: "It's been a very tough week, however, I'm happy with the progress we've made. The feeling with the kart has changed a lot due to the fact that I have grown [in height] a lot, yet the team has worked tirelessly to put me in a position to do the best I could."