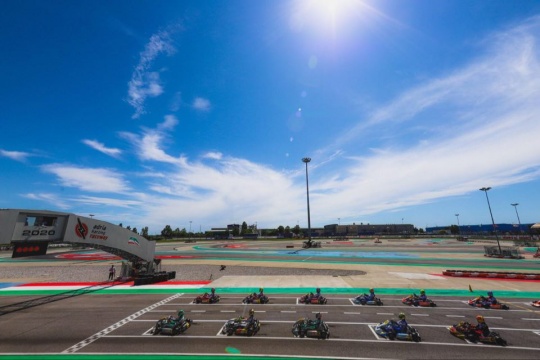 Author: Vroomkart International
Adria's double weekend comes to an end by awarding the first title of the 2020 season!
This double and tough weekend arrives at the end credits but at the same time it works as a new beginning for what was likely to be a lost season. Double races for all the protagonists, not without twists and turns, even 24 hours later than yesterday's pre-finals and finals.

OK - Puhakka doubles and wins the Super Master Series
Simo Puhakka (Tony Kart) takes over the entire week of Adria. The Finnish replicates yesterday's good result with the pre-final and final, still imposing that infernal rhythm that, in fact, has left no way for the opponents. More than three seconds on competition and mathematical certainty for the title of WSK Super Master Series 2020. Behind Puhakka, the usual Fabian Federer (SRP Racing Team) plays on the podium and third in the general classification. Bronze medal of the day for Riccardo Longhi (Birel Art) good at redeeming the day yesterday preceding his partner Giuseppe Palomba (Birel Art). The Campania climbs back one position and takes home the second place overall in the general classification, top five in the race for the third Birel Art by Alex Irlando and Adrien Renaudin (Sodi Kart). Gustafsson (Charles Leclerc) returns to tenth place despite a double pole, out Camplese (SC Perfomance) and Viganò (Charles Leclerc).

OK - Bedrin you are perfect!
After Simo Puhakka in KZ2, Nikita Bedrin (Ward Racing) also deserves the title of "perfect" at the end of this week. The Russian could not start the season better by dominating the Senior from start to finish and replicating yesterday with the pre-final and finals both dominated. Even for Bedrin are more than three seconds ahead of rivals under the checkered flag, a weekend like this could only end with the title of Champion 2020 in comeback. Charles Leclerc's team gets on the podium thanks to Jamie Day's recovery of three positions, the same performance for the best of Forza Racing, Rafael Camara on the third step of the podium. Matheus Morgatto (Parolin) closes fourth, Joe Turney (Tony Kart) fifth. In the general classification, Andrea Antonelli is the vice champion behind Bedrin, third Pedro Hiltbrand (Tony Kart).

OKJ - Ugochukwu wins the race, Lindblad Champion
Stars and stripes victory in the second race of the Junior weekend. Ugo Ugochukwu leads the Church team hat-trick by maximizing pole position by winning the pre-final. First from start to finish, Ugochukwu kept at bay a newfound Alfio Spina, already a winner of the first races, third Arvid Lindblad. The Englishman, protagonist of the whole week, gets the points necessary to crown himself WSK 2020 Champion. Top five for the Polish home Birel Art, Tymoteusz Kucharczyk, fifth Miron Pigasov with ten positions reassembled compared to the start. Second and third place in the general classification for Pasiewicz (Tony Kart) and Brando Badoer.

60 Mini - Matveev takes his title, Nakamura triumphs in the Final
The curtain also falls on the 60 Mini with the last act assigned to Kean Berta Nakamura (Team Driver) first after a fight against Dmitry Matveev (Energy). As many as five exchanges of position between the two until the last available lap with Nakamura who finally check it out taking the race home, podium for Matveev and title of Champion 60 Mini. Behind the lead duo, excellent third place for Maciej Gladysz (Parolin) with two reassembled positions. Nakamura and Gladysz also rise on the podium of the general classification, respectively in second and third place.