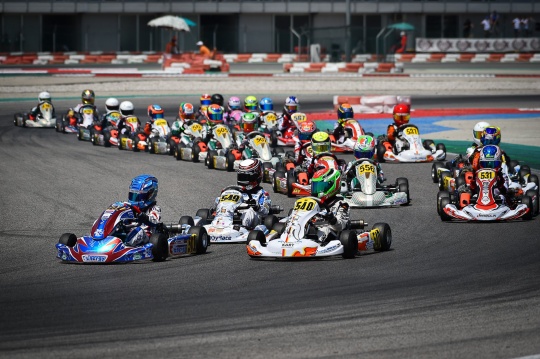 Author: Vroomkart International
Adria archives the third round of the Super Master Series with the victories of Puhakka (KZ2), Bedrin (OK), Lindblad (OKJ) and Matveev (60 Mini).
KZ2 - Puhakka without problems
The premier class returns in style with a final, the first of the weekend, not at all obvious. Speech valid for everyone except for a great Simo Puhakka (Tony Kart), first on the starting grid after the victory in the pre-final. The Finn completes the work during the decisive twenty laps, starting well from pole and keeping an arrogant Viganò (Charles Leclerc) behind him in the first few races. Puhakka is good at exploiting the tussle behind him to escape halfway through the race and finish first with half a second behind. Behind the winner, Stan Pex has the upper hand, reassembled by three positions with respect to the start and able to hurry the practice of his opponents immediately, keeping Matteo Viganò behind him. The Italian starts strong but remains bottled up in the fight with Pex and Ippolito, only to reassemble with fast laps (his best lap in 47,694), a clear message for tomorrow's final. Top five ended by CRG's first home, Paolo Ippolito, more than positive during the weekend, fifth by Giuseppe Palomba (Birel Art). Four positions come back for Riccardo Longhi (Birel Art), sixth on arrival ahead of Viktor Gustafsson (Charles Leclerc).

OK - Bedrin, what a show
Nikita Bedrin (Ward Racing) is running as a new owner of the Senior. The Russian driver does not miss a beat and after qualifying, heats and pre-final, he also takes home the first final of the weekend without problems, finishing with four seconds ahead of the competition. Capital performance that bodes well for the immediate future in the FIA ​​field. Podium guaranteed also for Andrea Kimi Antonelli and Taylor Barnard (Rosberg Racing) who do not get worse nor improve the second and third starting positions, also does Pedro Hiltbrand (Tony Kart) in fourth place. Top five for Matheus Morgatto (Parolin), best comeback for Jamie Day (Charles Leclerc) with nine positions reassembled and sixth final place.

OKJ - Lindblad and Badoer double
Arvid Lindblad avenges the last heats of Wednesday with a Saturday as a champion, pre-final, pole position and victory. Full loot useful for the ranking and for the competitiveness that had already allowed the Englishman to be in great shape during the first part of the year. Brace for the team thanks to the second place of Brando Badoer, absolute protagonist of Adria seven tenths from the victory, third Karol Pasiewicz (Tony Kart). The ranking is animated by overtaking, the Polish Birel Art, Tymoteusz Kucharczyk in fourth place, fifth the newcomer of the RFM house, Freddie Slater. Many comebacks in the top ten including Taponen (Tony Kart) and Neate (Tony Kart) with ten and thirteen respective overtaking.

60 Mini - Matveev at the last breath
The 60 Mini closes the Saturday program with the final scheduled. Already favorite on the eve, Dmitry Matveev (Energy) finishes in first place by winning at the last breath with overtaking at the last useful lap. Podium completed by the Japanese Kean Berta Nakamura (Team Driver) and Jan Przyrowsky (AV Racing). Top five for a good Antonio Apicella and Maciej Gladysz (Parolin).

See you tomorrow with pre-finals and finals valid for the fourth and final WSK Super Master Series round.