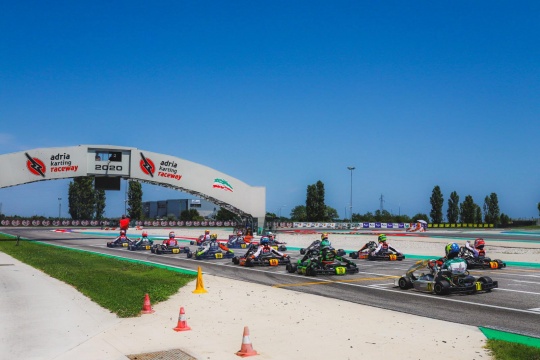 Author: Vroomkart International
On the Adria track you can breathe “racing” again with the first heats of the weekend.
The double round of Adria gets underway after having filed the first qualifying yesterday, space for direct clashes of the four categories.

KZ2 - Viganò almost perfect
Matteo Viganò puts his signature on the first heats of the resumption of the season obtaining two victories and a second place. Almost perfect progression for the driver Charles Leclerc who puts a serious mortgage on the pre-final A on Saturday 4th July. Behind Viganò, rival and brand mate, Giuseppe Palomba (Birel Art) with a win, a second and a third place in assets useful for the pole position of the second pre-final on Saturday. Third overall position for the umpteenth Birel Art frame, this time led by the Vice-World Champion, Riccardo Longhi more than positive with a third, a second place and a victory at the end of today's program. Top five sanctioned by the first of the "white-green", Simo Puhakka (Tony Kart), follows Danilo Albanese with third place for the pre-final A. Loses ground compared to the initial pole Viktor Gustafsson (Charles Leclerc) author of a victory.

OK - Bedrin continues the ride
Despite the long stop, Nikita Bedrin (Ward Racing) is back in splendid shape. The Russian impressed the competition for the huge pace imposed in the three heats completed and won one after the other. Bedrin will lead the pre-final A on Saturday, opposite pole position in the hands of Andrea Kimi Antonelli, another promise of the new Senior and first of the Italians with one less victory than his rival. Good progress for the Brazilian Rafael Camara (Forza Racing), still proactive on the Adria curves with a success in addition to two third places. Fourth overall for Joseph Turney (Tony Kart), fifth Taylor Barnard (Rosberg Racing), also good Luigi Coluccio (Kosmic) in sixth absolute position.

OKJ - Unrivaled Badoer
Brando Badoer redeems himself from the last few appointments, managing to remain consistently in first position for four heats in a row. Applause for the Italian who will now wait only Saturday for the moment of truth, the same speech for the Polish Karol Pasiewicz (Tony Kart) with two wins less but the pole of the pre-final B. Third the second of the Poles, Tymoteusz Kucharczyk (Birel Art), fourth and fifth place assigned to Valerio Rinicella (Parolin) and Coskun Irfan (RFM). Final disaster for Arvid Lindblad vying for the first places after two wins and a second place, then ruined by retiring in the last heat.

60 Mini - Matveev takes back the leadership
After such an overwhelming start, the Russian drivers could only bounce back to the prominent positions of the 60 Mini. Dmitry Matveev (Energy) still closes in front of everyone with three wins and a fourth place, useful for the pole of the pre-final A, instead the new entry Griffin Peebles (AV Racing) will captain the prefinal B with the great consistency shown. Third place for Rene Lammers (Baby Race), fourth Mark Kastelic (Team Driver) and fifth Lenn Nijs (Team Driver) on equal points with Maciej Gladysz (Parolin).

As already anticipated in the previous days, from tomorrow the qualifying and heats program will be repeated but it will be valid for round number four with pre-finals and finals scheduled for Sunday 5 July.