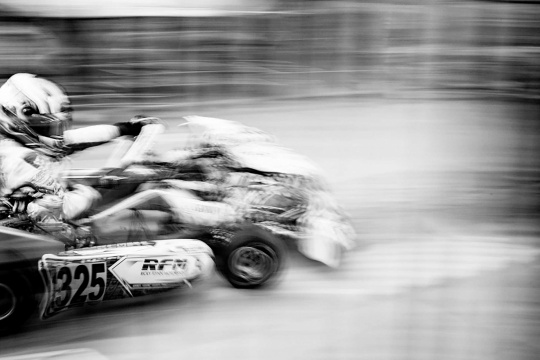 Author: Vroomkart International
The world of Motorsports has always fascinated and intrigued people for that sensation of speed and for all those feelings that it inspires, but who narrates the story and fixes them for all time?
In the May issue of Vroom we tried to understand better what the job of the racing photographer is. Below is a small preview of our interviews that you will find in full format on Vroom of May.

Chris Walker (kartpix.net)
- How long did it take you to develop your style?
«I’m not sure how long it took me to develop a style, or if I ever have, when I first started out in the 80’s I certainly tried all the different types of film black-and-white, colour print and slides, and particularly with slide film back in the day exposure had to be absolutely spot-on and it’s something that’s always stood me in good stead, so from getting my first proper camera to getting images published was probably in the re-gion of four years».
Giovanni Cuna (cunaphoto.it)
- What differences do you find in current photography with that of a few years ago?
«We have to understand what time frame is meant, if for some years now or from the transition from skin to digital. Without going too long, I describe what are the differences that I noticed in this "digital" era. I personally have noticed more and more the use of programs to make "pleasant" photos that in some cases would have been unacceptable. For heaven's sake, mine does not want to be controversial, but the use of the various photo editing programs must be used sparingly, I do not deny the use on my part too, but distorting the true nature of the images makes the image much more subtle dividing line between photography and graphics. The future of digital is a consequence of the times, progress is unstoppable. In these years I have known many guys who have approached photography in karting, many good and many less, but it is not for me to judge. The new generations perhaps demand the strange photo and that's okay, I remain of the opinion that before approaching a certain category, be it Sport, Still life, Fashion etc, you have to fill your luggage, I am sure that in many they would appreciate the old "red" dark room, the charm of seeing the image appear by swinging a bowl of revealing liquid, would make your heart beat
Davide Pastanella (Wafeproject)
Before you were a driver, what is the best memory that comes to your mind?
«As a driver the victory of the Italian championship in Ugento in 2005, an incredible race where everything was perfect, I won without even a drop of sweat ... very first time everything worked perfectly. As a photographer, the world final at Essay in 2014 where Lando Norris won the world championship was my first year as a photographer at a world championship ... following the driver who won, I didn't know who he was and who would arrive in F1, but I relived the same sensations that I felt as a driver, on the track, trying to try what he felt ... and under the podium I cried with emotion ».

Vincent Franken (FM Images)
Which is the best and worst part of your job?
«I travel a lot, last year I made around 50 flights and I never get used to it. Once you arrive at the track there is no time to rest and have to work soon as possible. But the good part is that you see a lot of the world and most important to see the photo’s appear on Social Media, Magazines and Newspapers».
Mario Perrucca
- Mario when does your passion for photography and motors start?
«I would always say and for this I just have to thank my father who transmitted me, even involuntarily, both passions. However, the latter experienced two parallel tracks, at least at the beginning. In fact, since I was a child I followed Formula One races on TV with my father ».
FULL ARTICLE HERE: https://pocketmags.com/it/vroom-international-magazine
S.C.