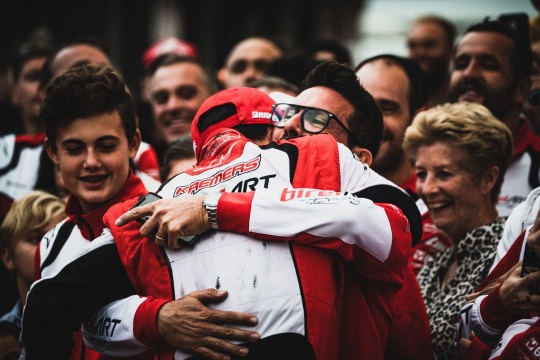 Author: Vroomkart International
Birel Art President and World Champion turns 48 today!
Always linked to and then a symbol of Birel Art colors, the President of the house of Lissone has been able to carry on a tradition that makes "White & Reds" one of the most important teams in the history of this sport.

In the paddocks, Ronni Sala not only represents an important and weighty figure but, above all, a man of charisma, determination and an insatiable desire to win. Those same ingredients that a few months ago brought Birel Art to the historic world 1-2 with Marjin Kremers and Riccardo Longhi, respectively Champion and Vice World Champion in Lonato.

A memorable weekend that is only the crowning glory of a process that started from afar which, inevitably, would bear its fruit, given his reputation. That 1-2 gave Birel Art even more impetus to raise the bar even further in this 2020, which started with a bang with the two victories in a row in KZ2 by Giuseppe Palomba, another spearhead of Sala's line-up.

Looking back at the recent past, here's what Sala said after winning the 2019 World Cup:

"For several years now, thanks to the work carried out and the strategy developed within the company, Birel ART has achieved success internationally and worldwide through its important distribution network. We have been missing only the World title for too long. It must be remembered that - in Genk in 2018 - Marijn Kremers was already starting from the front row in the Final, but then he was the victim of a contact on the first lap! A few months ago, a similar accident happened to Alessandro Irlando, when the European title was near. This time, we scored. Marijn did a perfect race; he deserves this title. Riccardo Longhi was again incredibly fast and this second place in KZ means a lot; only a few months ago, he was still in KZ2. The competitiveness of Irlando and that of our TM Racing engines confirmed that we were performing highly with all our drivers! It's a pity that Alessandro had a technical problem from the beginning."

Thus, an all-round look at Birel Art, and its style of racing, national and - above all – international, to whom we wish many more seasons and reasons to celebrate.