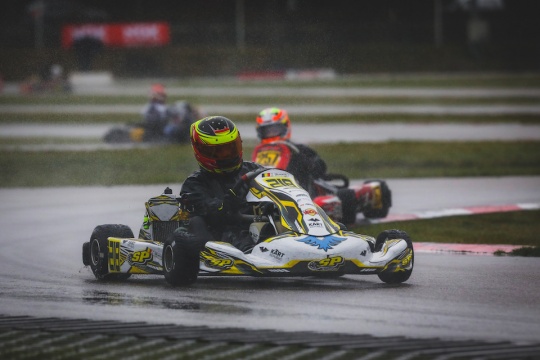 Press Release by: AG Media and Management
Weekend of comebacks for Tom Braeken at the BNL Kick-Off round, placed in Genk.
The BNL Karting Series did not start in the best possible way for Tom Braeken who had to settle for the 17th position in the Final in the kick-off event.

The weekend had started encouragingly for Braeken. He was quick in the Free Practice rounds that preceded the Qualifying Practices. In the latter, however, the presence of traffic prevented the Belgian driver from improving on the last lap, forcing him to P15 in the group.

Starting 17th in the first heat, the SP Motorsport driver left everyone speechless in the first heat, gaining 14 positions and finishing in 3rd place. With this pace, the Belgian was well-prepared for the second heat where, however, the arrival of the rain stopped his run up the grid.

Despite a contact at the start of the Final, and the consequent drop to 34th place at the 2nd corner, Tom was able to recover as many as 17 positions to close in P17 in a full of rain Final, definitely reflecting his potential and talent also with rainy conditions.

Tom Braeken, SP Motorsport: "It was a two-faced weekend, in the sense that we were as fast as we were unlucky. If we look at the positive side, I can say with certainty that the potential is high, so I'm confident for the rest of the season. Now I'm going to continue to train so I can be ready for the next races."

Braeken’s next race will be the second round, the first one that assign points, of the BNL Karting Series, programmed for the first weekend of April in Genk.