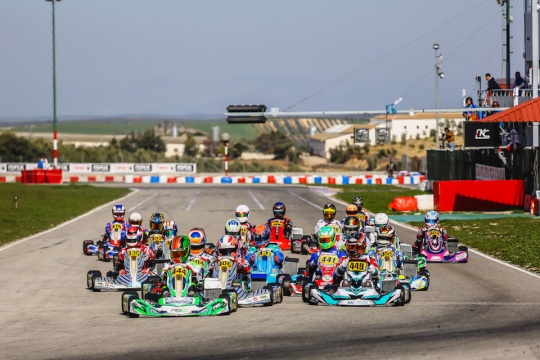 Author: Vroomkart International
4 years after the last edition, the Winter Cup by Rotax was finally back this weekend in Campillos. Exciting races and brilliant organization from the RMCET promoter Camp Company.
The challenging 1.588 metres of Circuito Karting Campillos hosted another day of exciting battles that have elected the first winners of Rotax season.


Micro MAX: Marsh and Radenkovic set the pace
Mateja Radenkovic (Bouvin Power) was the best placed driver after the heats. In the Finals the battle with Scott Marsh was hard. At the end, thanks to the victory in the decisive second Final the victory gone to Dan Holland’s Marsh. The Dutchman Dean Hoogendoorm (KR) completed the podium.
Junior MAX: “Sir” Oli Pylka
Oli Pylka (Dan Holland Racing) has continued his road to the overall victory. The driver from Poland won the first Final but in the second struggled a bit and at the end he crossed the finish line in 2nd place behind Daniel Guinchard (KR Sport). The last step of the podium gone to the best rookie Aaron Walker (Strawberry Racing).


Senior MAX: Valtanen wins after a thrilling Sunday
After a good beginning, the tide turned for the Scandinavian Juho Valtanen (SP Motorsport). He dropped back to fourth place while rookie Sean Butcher (KR Sport) celebrated the race win. But a penalty for jump start in the second Final prevented Butcher to complete the mission, in the meantime Valtanen was back on 1st place and took the race victory and the overall one.


DD2: Xander Przybylak rules
Xander Przybylak (Bouvin Power) was the man of the weekend in the DD2 category. He crowned a perfect victory winning both finals, collected the maximum of points an asserted himself on the top of the day’s classification. 2nd place for Frenchman Nicloas Picot (Daems Racing), the newcomer Silas Rytter (RS Competition) took third place on the podium.


DD2 Master: Muranski dominates but Champion wins
The DD2 Masters was a feud of Slawomir Muranksi (46Team) from the very beginning. He took the pole position, the 1st place after the heat and the victory in the Final 1. But the Frenchman Rudy Champion (PKS Competition) surprised him in the Final 2 and took the race victory and the overall success. 3rd place for the German Andreas Schindler from RS Competition.
© photo: M. Segato