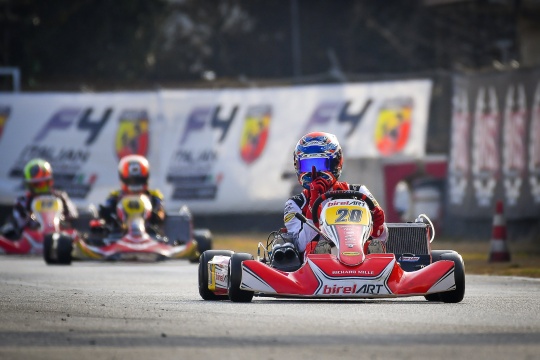 Author: Vroomkart International
A great show with unexpected turns in Lonato for the second round of the Super Master Series. Palomba (KZ2), Turney (OK), Lindblad (OKJ) and Skulanov (60 Mini) bring home wins.
The final day of the WSK-branded weekend reserved battles from start to finish with the last heats, the pre-finals and, of course, the finals of each category.

KZ2 - Palomba-Federer from accident to victory
After Saturday's taking stock of direct confrontations, today changed all the cards on the table for the premier class. The first surprises came immediately with Prefinal A, led by Giacomo Pollini (NGM), a true and proper favorite for the final victory, and subsequently out early on, due to a contact while passing. With Pollini out and Riccardo Longhi (Birel Art) far from the first, space for Giuseppe Palomba (Birel Art) for prefinal A and Alex Irlando (Birel Art) in pref B. Hence, first row all Birel Art, once again, after seven days.

In the final 21 laps, the KZ2 came back big time, thanks to the show offered by all the top drivers. After the first start, at the second corner of Lonato, the episode that threatened to change the fate of the race almost radically, that is, the crash that involved Giuseppe Palomba and Fabian Federer (SRP Racing Team), also in the leading positions. With the red flag always out during the first lap, everything to be redone and restarting planned shortly thereafter. After returning from the accident but without damage, both Palomba and Federer subsequently managed to resume the race. After the restart, this time it is Alex Irlando to take the reins of the race but only provisionally; it will, in fact, be Giuseppe Palomba to bring himself ahead and try to escape. With the now well-secured victory in sight, the show moved behind the Italian driver from the Campania region with the three-way fight between Federer, Irlando and Iglesias (Formula K) in contention. Brawl at the limit between the three big names, but then Federer moves firmly into second place ahead of Irlando and Douglas Lundberg (Novalux), who'd climbed fourth to the detriment of Iglesias, fifth. Deserved victory for Palomba who replicates the Winter Cup and gives Birel Art yet another seasonal trophy. Worth noting is the comeback of 14 positions by Riccardo Longhi, tenth after the 5sec penalty.

OK - Tony Kart with another 1-2
With yet another great performance, Tony Kart once again demonstrates its supremacy and makes the Senior its own, one week after the 1-2 in the Winter Cup. In the morning, the prefinals A and B had seen Andrea Kimi Antonelli (KR) and Dilano Van T 'Hoff (Forza Racing) take the lead and in the front row for the final. At the go, it's however Luigi Coluccio (Kosmic) who makes the best start, taking the lead from the second row, before Antonelli returns after the first four laps of the race. At the end of the short fight between the two Italian drivers, just like last week, it was Joseph Turney (Tony Kart) who silenced everyone by recovering five positions and taking the lead already during the sixth lap. The British driver had to do nothing but try to escape ahead, taking his team mate Pedro Hiltbrand (Tony Kart) with him, also gaining five places from the start. Behind the white-green duo, no holds barred between Antonelli and Taylor Barnard (Rosberg Racing), the star players of most of the race and at loggerheads during the last lap. Turney then crossed the finish line first, followed closely by Hiltbrand, third Antonelli who, at the last corner, moves ahead of brand mate Barnard. Top five closed by Kirill Smal (Energy), sixth Coluccio and seventh Van T'Hoff immediately outside the head group.

OKJ - Lindblad wins with experience
At the end of the last direct heats, the Junior came alive with the prefinals A and B won respectively by Igor Cepil (KR) and Arvid Linbdlad (KR). The double success of the two teammates then opened the dance for what was the fight to the very last corner for the absolute victory. After the start of the Junior final, Cepil was the first leader, immediately threatened by the excellent Brando Badoer (KR), already poleman and protagonist of the weekend. There will be three exchanges of positions between the two rivals, set aside on the sixth lap by a resplendent Arvid Lindblad, more than ever constant and once again in command of the Junior. The British driver took advantage of his past experiences and this time he left nothing to the competition, managing to keep the lead of the race up to the checkered flag. In second place, a battle won by Badoer over Cepil, in any case among the best of the day. Fourth and fifth place assigned to Tymoteusz Kucharczyk (Birel Art) and Karol Pasiewicz (Tony Kart). In the top ten, the good comeback of Bertuca (Birel Art), eighth after thirteen overtakes, a progression for Spina (KR) ruined thanks to a 5sec penalty for the front spoiler.

60 Mini - Skulanov on the run
The 60 Mini ends the day's program with the last race of the day. Wins for Matveev (Energy) and Skulanov (Formula K) in the morning double pre-final and an all-Russian front row for the 60 Mini finale. After the start, it is Rashid Al Dhaheri (Parolin) to impose his own pace but only for a short while; in fact, Skulanov will take back the number one spot and then close the race with his escape for the victory. More than a second ahead, the Russian ends the race practically alone under the checkered flag, victorious in front of Rashid Al Dhaheri, competitive but not enough to win. Third was Dmitry Matveev, who had started from second position. Top five closed by Simone Bianco, to the joy of CRG with 16 overtakes to his credit, fifth Jan Przyrowsky (AV Racing). Noteworthy, the good weekend of Anatoly Khavalkin (Parolin) fighting for the general classification and the podium, subsequently involved in the crash with Bianco who, in fact, forced him to the 26th position. Same fate for the Tony Kart duo, Helias (19th) and Egozi (34th).