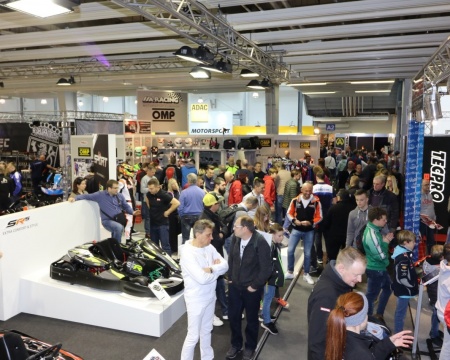 Author: Vroomkart International
Over the past weekend, Offenbach am Main in Germany was once again the center of the karting world with the 28th edition of the IKA Kartmesse!
An important appointment for all professionals who have been able to count on the German event for news and not only on the world of karting. Although that of 2020 was a "restricted" edition compared to the previous ones, the signals were positive and, indeed, they launched innovative ideas for the next few years.

“Economic reasons led to the closing of hall A4. Due to its location, this area has always been unpopular with visitors and consequently with exhibitors, too. Therefore, we had to react for 2020. But we have new plans for the future: Hall 4 is supposed to become a home for esports. This field is booming enormously and it makes sense to give this discipline a platform at the kart fair. The decision of the DMSB, which has recently recognized sim racing as an official motorsports discipline, shows that this sport is gaining more and more acceptance”, explained IKA junior director Marcel Fuchsberger.

Overall, the fair made a more compact impression, but the essentials were to be found on a total area of ​​almost 9,000 square metres with almost 140 exhibitors, which included almost 70% from international origin. All sectors of the industry were represented: racing, leisure karting, tools, clothing, equipment and accessories. With over 480 brands, there was a lot to discover on a tour through the exhibition halls.

The segment that attracted most audiences was the field of leisure, indoor and rental kart was represented widely and is clearly growing. The offer included everything the sector has to offer: a variety of different karts, circuit equipment, track-building-systems, timing technology, software solutions, display systems and much more.

Kart racing was sufficiently represented: OK and KZ engines, single-brand options or engines for club- and hobby-drivers were found on every corner. Along with that, several electric engines, such as the new E20 by Rotax were in the spotlight. Accessories, tires, spare parts, tools, the huge field of clothing with overalls, helmets, gloves and safety equipment completed the vast range. And of course chassis were not missing either: CRG, Kart Republic, FA Kart, Tony Kart, Kosmic, Jesolo, Intrepid, TBKart, Sodi, Praga, Formula K, Maranello or Kosmos could be checked out at various stands – including many of the homologated Mini karts.

Consulting and the exchange of information are still very popular during the IKA. At many stands, manufacturers and consumers were eager to discuss innovations and trends. In particular, the motorsport associations such as the DMSB, the ADAC, AvD and the NAVC answered many questions and provided facts and news abut the different karting series such as the DKM, DEKM, the ADAC Kart Masters, the Rotax MAX Challenge, the Rok Cup and the Kart Trophy Weiß-Blau or the GKC 100.

After two days of trade show, IKA director Botho G. Wagner concluded: “Like the entire industry, the IKA is changing. We have been working hard to break new ground since last year. Closing hall 4 was not easy for us, but it was a necessary step, at least temporarily. I don't think it harmed the fair’s atmosphere, contrary to my personal fears. Overall, we have experienced two well-attended days of exhibition, which probably will match the number of visitors we had three years ago. Equally, we got a largely positive feedback from the exhibitors. I am sure that these efforts will already be reflected during the 29th edition of the IKA Kartmesse on January 30th and 31st, 2021."