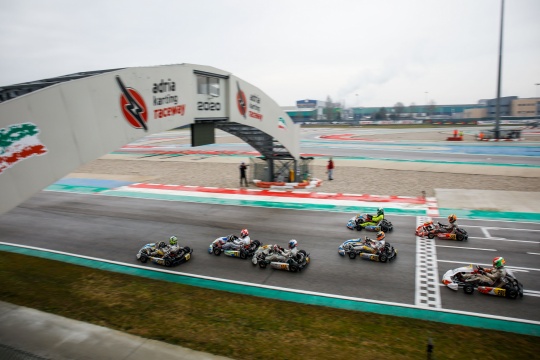 Author: Vroomkart International
The season's first matches took place at the Adria track today. With all the heats completed, the Champions Cup is set to live the finale.
On Adria's wet tarmac, the drivers of the three classes in contention gave birth to the first direct battles of 2020.

OK - Ten Brinke, unstoppable
In Senior, Antonelli's absence is immediately noticed, due to a bad flu. The protagonist of the day is OKJ World Champion Thomas Ten Brinke (RFM), with two wins and a second place. He starts in pole position for pre-final A; behind him and in front of everyone else for prefinal B is Taylor Barnard (Rosberg Racing) with a victory and two second places. First rows completed by Van T’Hoff (Forza Racing) for group A and OK rookie, Van Hoepen (Rosberg Racing) for group B.

OKJ – Lindbald, faultless
The Junior keeps the Champions Cup weekend alive with the first direct clashes between those who will be the protagonists of the season. Best placements for Arvid Lindblad (KR) with two wins; same for poleman Brando Badoer (KR), second overall and contender to the front row of the final with the first spot for tomorrow's pre-final B. Top four include the excellent Spina (KR) and Stenshorne (Rosberg Racing), respectively in second place for groups A and B. Best recovery in the top ten for Bertuca (Birel Art), eighth overall and fourth for group B.

60 Mini – Gladysz, at the top
The new 60 Mini starts under the sign of Maciej Gladysz (Parolin). After the numerous direct clashes, the Pole takes pole for the next pre-final A. Head to head with his team mate Khavalkin (Parolin), leader for group B, third and fourth virtual position assigned to Matveev (Energy) and Przyrowsky (AV Racing). Al Dhaheri (Parolin) and Trukhin (Energy) put on a great show with two comebacks from the back.

The Champions Cup program will continue tomorrow with pre-finals and category finals.