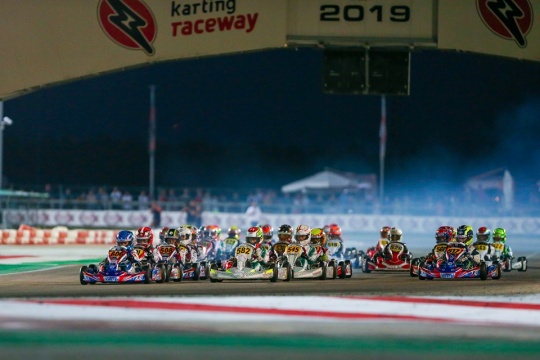 Author: Vroomkart International
The new season is set to start with the 2020 edition of the WSK Champions Cup officially inaugurating the new course of international karting.
After the collective tests, most of the season's protagonists are ready to put on their suits and helmets and compete for the season's first trophy.

A by now regular appointment in international karting that will feature 60 Mini, OK and OKJ on the track. For all three categories, an air of change, given too by the many changes from one category to the next and teams (already addressed HERE), but there's more. Like every self-respecting start of the season, the old beliefs and cards on the table are about to be reshuffled, and the game to be played out.

The 60 Mini is highly awaited for by insiders, thanks to the new homologation. New fairings, technical innovations and unknown tires put all the teams on equal or almost equal terms. It is, therefore, legitimate to expect surprises from the very start.

In Junior it's also time for change and attack on the mighty KR, with many candidates contending for glory, starting with the OTK army, Ricky Flynn Motorsport, Ward Racing, Forza Racing and others. Birel Art will also have its say, as will Parolin and Energy Corse. A category revolutionized by many passages into OK, notably Andrea Kimi Antonelli and Thomas Ten Brinke.

The Senior, in addition to the aforementioned protagonists, will not see the much expected Tony Kart World Champion, Lorenzo Travisanutto, and the new F4 drivers such as Gabriele Minì, Gabriel Bortoleto and Dino Beganovic. The new wave advances.

Stay tuned for updates tomorrow, Friday 24 January, with the first official qualifying, then moving on to Saturday 25 and Sunday 26 with heats, pre-finals and finals.