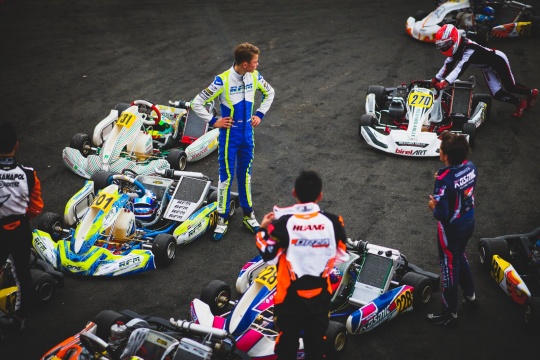 Author: Vroomkart International
With the year's first entry list, here are all the team and category changes of the first three classes examined: 60 Mini, OKJ and OK.
Like every start of the season, there are many new features and novelties, not only technical but, above all, as regards the driver market, a real pre-season cornerstone. Thanks to the year's first real race, the entry lists have thus revealed even better what the new colors of all the top drivers and emerging talents are to be expected by the general public.

60 Mini
In the category of the youngest drivers, the phenomenon of team change is something constant from start to finish. What we can say is that given the big names and technical innovations, the Mini will once again be among the most awaited category. As main novelties, we can certainly mention the Gamoto army with Bondarev, Cui, Frey, Chi, Cyrus, Minetto and Bozhidar. The Tony Kart factory team is ready to return to the upper floors of the category it has always dominated. The fight between Team Driver, Parolin and Baby Race with the high number of members will also be interesting, Sauber Karting Team returns to 60 Mini with the Brazilian new entry Miguel Costa. Not present at the first race, the Tony Kart line-up with Jules Caranta, Andreas Cardenas, James Egozi, Jimmy Helias and Kai Sorensen is equally much-awaited for.

OKJ
Great expectations also for the Junior with many of the top names still in the category and as many new entries. Among the hottest names, the debut of Emmo Fittipaldi with the team of Dino Chiesa, also an eye to the "baaaad rookies", and not only in Ricky Flynn Motorsport as in the ex Mini, Josh Irfan, Edgar Anpilogov, Dion Gowda and Freddie Slater. Change, too, in Forza Racing with Matheus Ferreira and Gustaw Wisniewski.
Category changes expected for two of the former protagonists of the cadet category, Alex Powell, again with Energy colors, and Riccardo Ianniello for KGT. Birel Art strengthens its Junior sector with Tymoteusz Kucharczyk.

OK
In the Senior there will be many new drivers to look out for during the year and their assault on FIA titles. KR amazes with the official arrival of Andrea Kimi Antonelli in the new category, followed by the ex-Tony Kart Martì Sobrepera, Leonardo Bertini, Laurens Van Hoepen and Harry Thompson going to Sauber Karting. From experience, the Briton seems the most tallied for the final success. Suit change also, as aforementioned in previous articles, for Nikita Bedrin with Ward Racing, Hugo Sasse with Parolin, Sebastian Gravlud with RFM, new adventure also for the reigning European Champion Marcus Amand (VDK) and for Kirill Smal switched to Energy colors. Tony Kart will field Diego Contecha, Pedro Hiltbrand, Lorenzo Travisanutto and Joseph Turney instead.

Thus the main new features excluding KZ, still parked in the pits before the season's first races. To see how it all plays out, no place like the track!