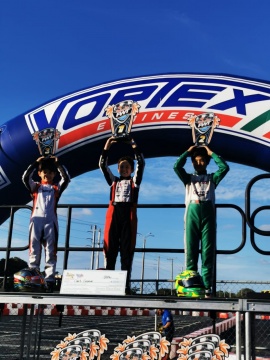 Author: Vroomkart International
First race and first podium of the season for Team Gamoto's YuanPu Cui, who finished second in the round opening of the Florida Winter Tour.
The Chinese driver, assisted by Neil Mckernan, started 2020 on the right foot in stage as competitive as the Mini Rok branded FWT, which this year celebrates its 22nd edition.

Salvatore Gatto, Team Manager: “We're happy with the result obtained by YuanPu, who's shown top-level form, despite this being only the first race of the season. We'd like to thank Neil Mckernan and Supertune for the excellent job they've done."

After the positive results of the WSK Promotion winter tests, the Gamoto Kart team is ready for the seasonal debut at the WSK Champions Cup scheduled this weekend at the Adria Karting Raceway, Italy.