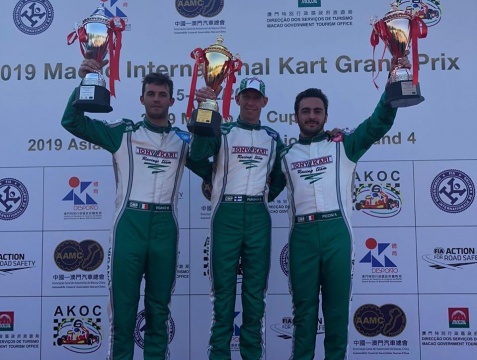 Author: Vroomkart International
The Macau Kart Grand Prix closed the international season in style, confirming itself as one of the most characteristic and suggestive events of 2019.
Mini ROK - Rashid Al Dhaheri was the driver to beat during the weekend, thanks to pole position and absolute domination put into the Qualifying Heats and the Prefinal.
In the Final, Al Dhaheri had to deal with the return of Aditya Wibiwo, Tiziano Monza and Enzo Tarvanichkul, making the fight for the podium extremely tight.
In the final laps, Aditya Wibiwo won the fight, crossing the finish line first and followed by Tiziano Monza and Enzo Tarvanichkul. Al Dhaheri classified P15 due to a bumper penalty.

X30 Junior - The Swiss Eron Rexhepi had a dominant weekend and won the final ahead to Zachary David and Ashay Bohra. The three fought hard until Rexhepi found the right rhythm and put more than a second between him and his main opponents.

X30 Mini - Still Rashid Al Dhaheri protagonist, this time in the X30 Mini. The Parolin Racing team bishop left nothing to chance, managing to get a deserved victory.

X30 Senior - Eduardo Coseting Jr made it all seem easy. After a great start, he made the final with over five seconds on the rest of the group. Ayato Iwasaki had to settle for second place, managing to keep at a safe distance the third classified, Xizheng Huang.

KZ - The shifter class was dominated by the Tony Kart Racing Team, that monopolized the podium. The winner was the Finn Simo Puhakka, followed by Matteo Viganò and Alessio Piccini. 4th position for Noah Milell.

Articles related to: Circuit of Macau