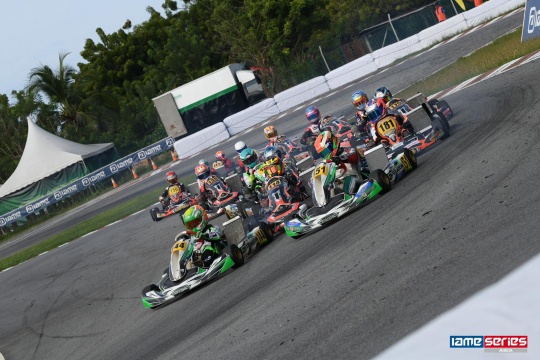 Press Release by: Iame
24th November 2019 – IAME’s 2019 race calendar in Asia came to a close with the completion of the IAME Asia Final 2019 in the picturesque circuit of MORAC Adventure Park in Langkawi, Malaysia. The race saw several European drivers take on drivers from all over Asia.
There was even a past World Champion and an European champion amongst the driver entries. But if these world class drivers ever had the thought that they can come and make easy pickings of the Asian drivers, they certainly had an awakening! All in all, there were drivers from 16 different countries battling for the top spot in each category to claim the coveted invitations to the IAME International Final 2020 in Le Mans.

The race week started with practice days as usual, with the drivers and their mechanics trying to find the best setup in the sweltering heat. There were forecast of tropical storms hitting the island during the race week, but fortunately all the drivers encountered were scattered showers, with the actual races taking place in hot and dry conditions.

CADET CATEGORY
The cadet category saw familiar names dominate the weekend once again. Pole sitter Chanoknan Veerathacha of Maxima Motorsports managed to capitalize on his strong showing during qualifying to stay amongst the front runners throughout the heats and pre-finals. Starting in third position on the grid for the Final race behind second position Timofey Mikhalov of DRM Racing Team and the 2019 IAME Series Asia overall Cadet champion William Go in first position, Chanoknan managed to keep his composure and exhibited impressive race craft in the race. Bidding his time for the perfect opportunity to make his move on the front two drivers, his patience was eventually rewarded with him taking the chequered flag and the win.

JUNIOR CATEGORY
As always, the Junior category in the IAME Asia Final 2019 left nothing wanting in the excitement department. It was a joy watching the young drivers’ confidence grow throughout the race weekend as they pushed both (young) man and machine to the limits to stay ahead of the competition.
Of particular mention is British driver Aaron Walker of Stratos G51. Racing in the IAME Asia Final for the very first time, Aaron stamped his authority in every race over the weekend. Qualifying in fourth position, Aaron took the win in both Heats 1 & 2 on Saturday. Starting on pole position in the Pre-Final and Final race on Sunday, Aaron managed to dominate the experienced field from the get-go. The chasing pack gave their all but, in the end, they were denied the top step of the podium.

SENIOR CATEGORY
The Senior grid was once again the highlight of the race, what with world class drivers like Davide Fore of Italy and Hannes Yanker of Germany amongst the entrants. Both very accomplished drivers in their own right in Europe. Pole position in Qualifying went to Hannes Yanker (59.112s), with Davide Fore coming in a close second having clocked a best time of a mere 0.061s adrift. Hannes and Davide would go on to lock out the first and second places in both the heats in the same order. Based on their dominance in the heats on Saturday, anyone would be forgiven to assume they would continue their momentum on Sunday. But alas, one Asian driver was saving his best for where it mattered most. Despite starting in fifth position on the Pre-Final grid, Dick Yu of PR1 Racing Team drove flawlessly to emerge victorious, relegating the Italian and German duo to second and third place respectively. Dick Yu’s newfound pace would continue into the Final race where he started on pole position. Not only was he able to keep his composure under heavy fire from ex-World Champion Davide Fore, he even managed to increase his lead to take the win 2.432s ahead of the hard charging Italian.

MASTER & CLUBMAN CATEGORY
The Master category was once again populated by familiar drivers. Yongboon Tirachaimongkol of Maxima Motorsports took pole position during qualifying. The surprise qualifier was certainly first timer to the series and Clubman driver Charernkaed Saediaw, also of Maxima Motorsports, who managed to out-qualify several more experienced drivers in the Master category to take second spot. IAME International Final 2019 Master category third place finisher Takeharu Nakamori of AutoInc racing could only muster another third place at the qualifying. But his winning of Heat 1 and second place in Heat 2 put him in a very strong position (second place) on the grid for the pre-final, which he went on to win. The final race was a hard-fought battle for him, as sixth-placed Yongboon managed to climb to the front to take the battle to the Japanese driver, piling on the pressure for much of the race. In the end, Takeharu managed to stay ahead, taking the chequered flag a mere 0.829s ahead of the determined Thai driver.