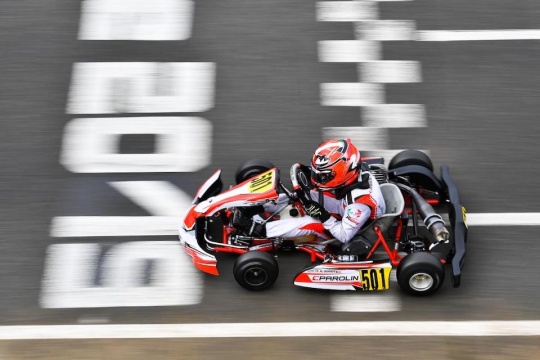 Author: Vroomkart International
Having joined the Parolin team at the start of the year, Rashid Al Dhaheri has written his name in the WSK record books several times this season. Let's get to know him a little more closely.
11 years old, fluent in 4 languages and over 5,000 kilometers away from home, Abu Dhabi-born Rashid Al Dhaheri has bet on Italy to crown his dream: the peaks of motorsport.

Rashid, who won the WSK Super Master Series and the WSK Euro Series with the Parolin Racing team this year, is the standard bearer of that ambitious generation of drivers ready to radically change their habits in order to achieve the goals they've set for themselves.
Together with coach Fausto Ippoliti, Rashid has not only refined his driving skills but has also adopted not a few bits of Italian culture, enough to become the Arab of Rome.

Who is behind the dark visor of Al Dhaheri's Arai? Let's find out.

Let's start with review of 2019.
«It's been a year I'll surely remember. In March I became the first driver of the Middle East and Asia to triumph in a WSK championship. In the Super Master Series, I won 3 out of 4 races, something that's never happened before in the last 7 years. In June, then, I took home the other WSK title, the Euro Series, with a gap of 65 points on the first of my rivals».
What struck insiders was the great maturity of your driving; how did you prepare for the season?
«Thanks for the compliment! Together with Fausto, we've been working hard to achieve the goals just mentioned. In the past, we were shuttling between the United Arab Emirates and Italy, but two years ago I took the big step; I moved here to train and be as close as possible to the race tracks».
Speaking of UAE: For motorsport enthusiasts, UAE rhymes with the Yas Marina Circuit which, with the advent of F1, has contributed to the development of motorsports in the country. How did you experience this growth?
«Motorsport is growing rapidly in Abu Dhabi. With time and European influence due to the Yas Marina circuit, everything is being refined, coming together. This undoubtedly leads younger people like me to approach motorsport, although in my opinion to make a difference you have to move to Italy ... and rely on the right people. I chose the former Formula 3000 champion, Fausto Ippoliti. He made me the driver I am today, and together with my father and my mother, has transmitted to me the determination necessary to be a winner».
At this point, the passage into OKJ seems obvious, a given.
«Calm is the virtue of the strong. For now I'm training hard with Fausto on all fronts; the physical one, on the track, in the wet, on a mental level. I don't know when the jump in Junior will take place; I just hope to do it at the right moment».
Who is Rashid Al Dhaheri, according to Fausto Ippoliti?

«Very determined. This is the Rashid I know; eager to learn and hone his skills. We are talking about a smart guy, with a great international background, who speaks four languages and loves Rome! When I introduce him, many ask him where in Rome he comes from; he's even learned to cook some Italian dishes with my mother. His favorites? Tortellini in broth and of course ... la carbonara!»