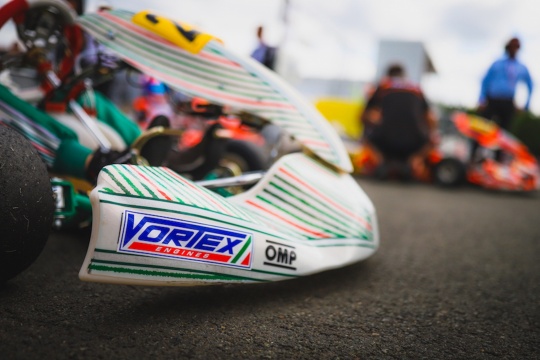 Author: Vroomkart International
Action-packed finals at the 7 Laghi Kart circuit in Castelletto di Branduzzo, Italy, which crowned the new WSK Open Cup champions.
60 MINI – A two-man match in 60 Mini, where the Russian Dmitry Matveev (Energy Corse) and the Bulgarian Nicola Tsolov (Team Driver) put on a thrilling show of overtaking for the duration of the entire race. Matveev managed to get by Tsolov on the last lap to achieve a well-deserved victory. It was, however, the Bulgarian, driving for Team Driver, to win the title, having won the first round in Lonato. Third on the podium was Gerasim Skulanov (Formula K Junior Team), author of a good race, with 6 positions recovered from his starting position.

OKJ - Marcus Amand (VDK Racing) seemingly wins a race that saw him lead the group from start to finish, but due to a maneuver judged incorrect by the stewards, it was Andrea Kimi Antonelli ( Rosberg Academy) to be assigned the win. Second on the podium was Artem Severiukhin (Ward Racing), third Dutchman Robert de Haan (Energy Corse). The Italian driver thus takes home victory in the final race and the title itself.

OK - In Senior, it was a fight tight between Taylor Barnard (Rosberg Academy), Joseph Turney (Tony Kart Racing Team), Dilano Van’t Hoff (Forza Racing) and Kirill Smal (Ward Racing). The title went to the British Tony Kart driver, who despite repeated attacks by Smal first, and then Barnard, achieved a deserved race victory. The title went in favor of the other Briton, Taylor Barnard, thanks to today's second place and the victory at the South Garda Karting of Lonato 7 days ago. Third on the podium was the Russian Kirill Smal, who slid further back in the early stages of the race due to contact with Turney.