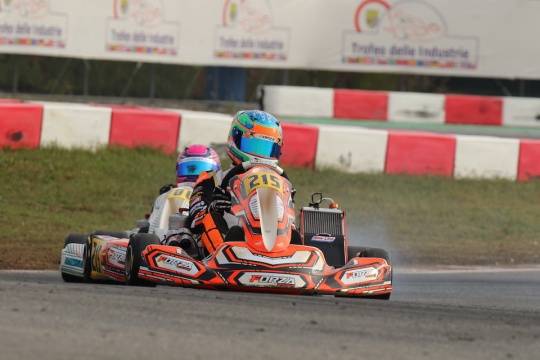 The Belgian driver, back from a good weekend, which allowed him to fight for the top positions.

The event started well in the Qualifying Practices with an 8th place, while in the heats thanks to a good pace, he finished in 5th and 6th position.

In the pre-final unfortunately he had a DNF due a technical problem, that he put him out from the competition.

Starting from 16th place for the final, despite the heavy rain, the Forza Racing driver drove very well and he recovered 8 places finishing in 8th place.

Gilles Stadsbader, Forza Racing (Exprit/TM): «I’m happy for the pace, it was pretty clear that I was competitive. But on the result side I think I deserved more. Unfortunately the retirement in the Prefinal didn’t help me and I was forced to do a strong come back in the Final. I took many risks but at the end I gained the top10 closing in P8. Next time will be better.»

Next stop for the young Belgian will be the second and last round of WSK Open Cup, at Castelletto di Branduzzo.