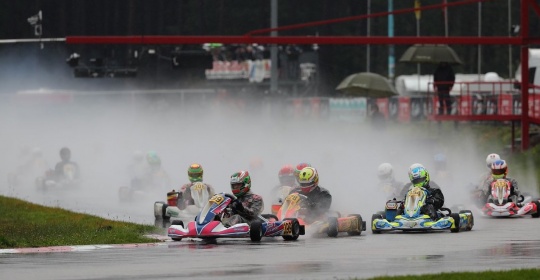 Author: Vroomkart International
BNL Karting Series champions crowned at Genk, even with inclemental weather conditions.
After several months, the 2019 BNL Karting Series season would come to a close at the
“Home of Champions,” Belgium’s Karting Genk in early October with an international field
comprising of 16 different nationalities over six classes, totalling almost 120 drivers, battling
hard all the way through the weekend at the 1,360-metre circuit.

The drivers from all across the globe would not only battle each other, but also the
elements, with variable rainfall hitting the Limburg-based circuit very hard at the latter part
of proceedings, but it did not dampen the intensity of the race weekend.

Micro Max – Van Der Struijs holds on to take title by a whisker
Holland’s Tommie Van Der Struijs (#54) would have to fend off all challengers to take a well-
earned title, despite not being as competitive as the remainder of the field. The youngster
on the Parolin chassis would end up fifth in the weekend standings to complete the podium,
but it would just be a mere six points separating the top three in the overall classification.

Thomas Strauven (#9-BEL) would win the weekend itself with 83 points, taking with it an
entry-only ticket for the 2020 Rotax Max International Trophy, but it would also propel the
young GKS Lemmens Power driver to vice-champion status.

This put him ahead of Kasper Schormans (#40-NED) who was looking to challenge Van Der
Struijs but could only manage third at the end of the year. Max Sadurski (#19-NED) would
take fourth overall, ahead of Dries Vanlangendonck (#15-BEL-GKS Lemmens Power), who
was able to consolidate a consistent season.

Mini Max – The Gerhards share the spoils, as Tim becomes champion
Tom Gerhards (#50-NED) put on a near-perfect performance reminiscent of his efforts back
in late March at the opening round, to comfortably take the title that Tom Braeken secured
this time last year, along with winning the weekend result with 95 points.

Chief rival Jayden Thien (#107-NED) would have to settle for runner-up status both in the
weekend and overall classification once the dust had settled, having not looked as
comfortable as Gerhards in both the dry and the wet.

2018 BNL Rotax Golden Trophy runner-up Enzo Bol (#155-NED) would still try his level best
to fight toward s a top-two finish, but would have to settle for third in the standings, in front
of Nick Gerhards (#60-NED), who managed to see out his season with a win in the final race
of the season. Teun Schmidt (#166-NED) would complete the overall podium, on 101 points,
but the Dutch driver will be looking for better results in 2020.

Junior Max – Van Vugt defends, as Haanen heads to Sarno!
Mike Van Vugt (#201-NED-JJ Racing)would successfully defend a second title this year,
having already captured the first at the Rotax Max Euro Trophy finale back at Wackersdorf
in early September, even though the Wogsum-based racer would not hit the weekend
podium, which was covered by just four points at the end of the action.

There was fierce competition for the final step on the rostrum, with that driver getting the
first of four tickets to the 20 th running of the Rotax Max Challenge Grand Finals. Both Kris
Haanen (#264-NED-Coles Racing) and Daniel Guinchard (#254-GBR-Persistence Motorsport)
were clearly the two drivers in the mix, but the Dutch driver would be top dog by the end of
the weekend, by just 15 points, meaning he will head to Italy.

Senior Max – Lahaye victorious on home soil
GKS Lemmens Power would have one of their drivers hit the top step and become a 2019
BNL Karting Series champion, as Dylan Lahaye (#238-BEL) would be able to get the upper
hand early in the final weekend of the year ahead of Clayton Ravenscroft (#399-GBR-KR
Sport), who came into the final round leading the standings.

But Lahaye was not to be denied, having started off the weekend very well with a perfect
score on day one, whilst Ravenscroft’s weekend would turn sour on the final day of racing.
The Briton went onto the grass off turn two in the final race of the year, ending his title
aspirations, as he looked to keep the title in the UK, after Joe Turney won it last year.

Ravenscroft would, however, get the chance to go to Sarno, having been awarded the ticket
at the championship podium, with Ilian Bruynseels taking the final step of the rostrum, 31
points adrift.

2019 Rotax Max Euro Trophy champion, Sweden’s Mathilda Olsson (#309-Strawberry
Racing) would end second up on the weekend podium, ahead of Mick Nolten (#304-NED-
GKS Lemmens Power), who ended his racing season on high with some great flourishes and
victories.

Xander Przybylak (#412-BEL-Bouvin Power) would take a perfect score at the “Home of
Champions’ to secure his place as a two-time DD2 champion, after a difficult mid-point of
the season saw him second in the standings coming into the final round.

It would also give him the chance to also head to the International Trophy at Le Mans,
whilst Greece’s Dionisis Liveris battled the Belgian all the way to the end of the season, but
would come up second best overall, and take third in the weekend results.

David Rehme, in the meantime, would make sure of his chance to head to Sarno, by taking
third in the overall standings, but kept himself out of trouble to finish runner-up in the
weekend results.

Tamsin Germain would pick up her first win of the weekend in the first race, after Cleirbaut
suffered dramas in qualifying, with the Briton taking second overall, ahead of Adams, who
will join Cleirbaut at Team Belgium in Sarno.

The calendar for the 2020 BNL Karting Series season is yet to be confirmed, with further
information due in the not too distant future. 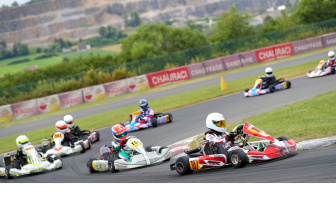 BNL Karting Series Round 2 – Racing hard, whatever the weather!