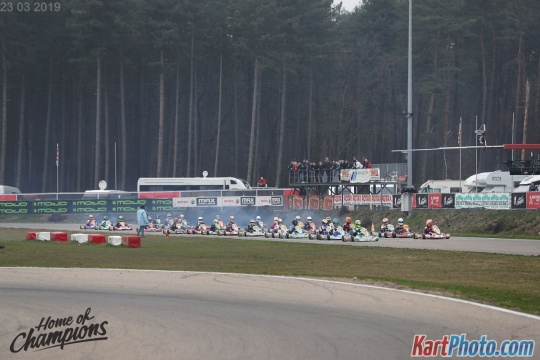 Author: Vroomkart International
The BNL Karting Series season sees out its 2019 campaign in Genk.
The 2019 BNL Karting Series season finale gets underway this coming weekend at the “Home of Champions,” Belgium’s Karting Genk, which has seen many famous names make their mark at the Limburg-located circuit, including Max Verstappen, André Lotterer and Jenson Button amongst others.

Six categories go into battle for one final time this year, having started their respective campaigns back in late March, to decide the respective champions and who will take one of the last remaining Rotax Max Challenge Grand Finals tickets, as the event celebrates its 20th running this coming late October in Sarno, Italy.

Along with the Grand Finals tickets, the championship organisers will be giving away three tickets to the 2020 Rotax Max Challenge International Trophy at Le Mans next August, with the weekend winners of the Micro Max, DD2 and DD2 Masters classes taking home the spoils.

With over 120 registered entrants, representing 16 different countries from across the globe, set to go racing just two weeks before the biggest highlight in the Rotax Racing calendar, they will also be cheered on with a former BNL competitor in the form of Rinus Van Kalmthout (aka Rinus Veekay), who secured vice-championship status in this year’s Indy lights championship, who is the special guest this weekend.

Tommie Van Der Struijs (#54-NED) is top of the overall standings in the Micro max class, but has a very slight lead coming into the final round of just 15 points, ahead of Kasper Schormans (#40-NED), who came fighting back in Mariembourg in early July.

Thomas Strauven (#9-BEL-GKS Lemmens Power) completes the top three, and is just 36 points off the current leader, but is a mere four points ahead of Max Sadurski (#19-NED), who is the only other driver apart from Van Der Struijs and Schormans that have taken a win this year.

Mini Max is also hotly contested between the top three in the standings, which is led by Tim Gerhards (#50-NED), who is only one of two drivers that have been at the class of the field this year.

This is despite the youngster having to end up second best to main title rival Jayden Thien, who had a superb day behind the wheel on the first day of action at the second round at Karting Des Fagnes.

Thien is 34 points adrift, with BNL Rotax Golden Trophy runner-up Enzeo Bol (#155-NED) still in with a distinct chance of bettering the pair, if they clash.

Mike Van Vugt (#201-NED-JJ Racing) is on course to successfully defend the Junior Max title he secured in October last year, having bridged a 57-point gap between himself and countryman Thom Reinaerdts (#237-NED-GKS Lemmens Power), but it may not be plain sailing in the final four races of the season.

Kris Haanen (#264-NED-Coles Racing) could also factor into the title dynamic, but will also have a battle on his hands, for what could end up being third in the standings with the likes of Daniel Guinchard (#254-GBR-Persistence Motorsport), Dani Van Dijk (#256-NED-JJ Racing), Tom Adams (#217-GBR-Coles Racing) and Matthew Higgins (#275-GBR-KR Sport).

There will be a new Senior Max champion in the BNL for 2019, but there is a titanic battle waiting in the wings to explode into action when the lights go out.

KR-Sport’s Clayton Ravenscroft (#399-GBR) is only one of the hot favourites, but has only just seven points separating himself and GKS Lemmens Power’s Dylan Lahaye (#328-BEL) for the lead in the standings, whilst his countryman Ilian Bruynseels (#308-Bouvin Power) rounds out the top three.

Another title that could be successfully defended this coming weekend is the DD2 class title, but it is not the defending champion, as DJ Liveris (#436-GRE-DAEMS Racing Team) took the lead after the halfway point, and comes into the final round with a 13-point lead ahead of defending champion Xander Przybylak (#412-BEL-Bouvin Power).

David Rehme (#455-SWE-Dan Holland Racing) looks to potentially consolidate at least third place in the standings, but will have to watch out for the #447 of Sébastien Degrande (BEL-DAEMS Racing Team), the #490 of Jarne Geussens (BEL) and fellow fast Swede Madeleine Radne (#468).

Carl Cleirbaut (#510-BEL-Bouvin Power), who is not only an accomplished baker in his own right, he also has sterling skills behind the wheel to be the only driver that has had a perfect score in any class this year.

The DD2 Masters points leader has secured eight wins in succession, and looks to sign off his perfect season in style in Genk, with the interesting battle being behind the #510 for second, which is very much heating up.

Tamsin Germain (#525-GBR) is 71 points off the Belgian, but her consistency in the previous race weekend saw her take three second place finishes at the challenging Karting Des Fagnes circuit. This has put the Briton ahead of Christophe Adams in the standings, with the #555 from Belgium rounding out the top three, 32 points behind Germain.

Kristof Lijnen (#588-BEL), Michael Becker (#526-GER-RS Competition),Frits Wernsen (#527-NED) and Alexander Durlinger (#551-NED) are just covered by 18 points going into Genk, so even this quarter may have a chance to try and get onto the championship podium at the end of the year.

The curtain call for this year’s BNL Karting Series season will also be live streamed via YouTube, thanks to Camp Company GmbH, along with Downforce Radio providing live audio coverage throughout the race weekend, with qualifying getting underway at 0900 on Saturday, October 5th, 2019.