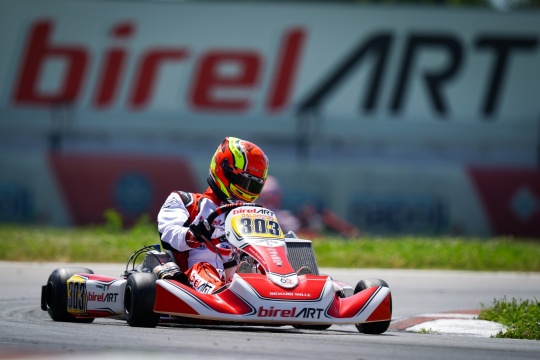 Author: Vroomkart International
The KZ, KZ2 and FIA Academy season comes to an end with the last appointment scheduled at the Lonato circuit.
The World Championship weekend turns the spotlight on the gearbox classes for the grand finale of yet another FIA season, ready to elect the new winners.

In KZ, much to see after the a fiery European ending in Sarno with the surprise victory of Jorrit Pex. The continental competition filed away, everything starts from scratch on a track well known by practically all the title contenders. In addition to Pex, expectations are high for the Tony Kart army with Marco Ardigò's latest adventure, close to retiring and among the weekend's favorites, to round off a stellar career. Together with the driver from Brescia, Simo Puhakka and Matteo Viganò will also try to have their say against the equally aggressive Anthony Abbasse, Bas Lammers and Adrien Renaudin for Sodikart. News instead in Birel Art at the starting blocks with the heavy-duty trio Irlando - Longhi - Kremers. Great expectations also at CRG where Paolo De Conto is sure to make his mark, the same for Pedro Hiltbrand, Jeremy Iglesias (Formula K) and Francesco Celenta (Praga), among others. Of note also, the return of a determined Davide Forè with Intrepid.

In KZ2, anything goes as to who may win,  given the high number of contenders for the final title. After the victory of Viganò in 2018, expectations for the clash at the top between Energy driver Emil Skaras (European Champion 2019) and Emilien Denner (CPB), winner in Sarno, without forgetting the Italian trio: Pollini (NGM Motorsport), Palomba (Birel Art) and Cunati (Modena Kart). The three Italians are ready to give battle at home after the excellent seasonal performances to date.

CRG and Tony Kart also on the warpath with David Vidales and Alessio Piccini confirmed for the white-greens with the addition of rookie Luca Bosco and Danilo Albanese. The same goes for the All-Blacks with Ippolito, Cebrian and Valenti, among others, along with the debutant in KZ2, Gabriel Bortoleto. Marseglia, Loubere and Dhalberg will be competing for Birel Art, while Van Walstijn, Paul and Lorandi run for Kart Republic, DR and Parolin.

End of season also for the FIA ​​Academy Trophy where Paolo Ferrari will try an assault on the first position of Robert De Haan on the former's home track.