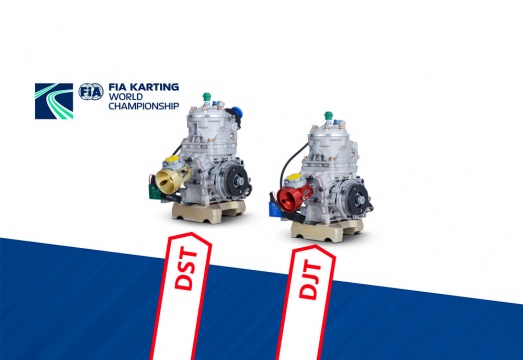 Press Release by: Vortex
Vortex Okj world champion at CIK FIA World championship.
Wonderful weekend at the Powerpark Circuit in Alahärmä, Finland, where our DJT engine pushes Thomas Ten Brinke towards the victory of the FIA Karting World Championship – Junior. The success is completed by the podiums conquered by Siksnelis, also in OKJ, and Thompson, third in OK with the DST engine.

OK-Junior. Constant performance, ease of use, power and speed. Once again, the Vortex engines display all their qualities in the most prestigious event of the season and gain two steps of the podium of the OKJ FIA Karting World Championship: the most important, the highest, is won by Thomas Ten Brinke (Ricky Flynn Motorsport), who, powered by the Vortex DJT engine, wins the world title. The third, instead, goes to Kajus Siksnelis (Ward Racing), who completes an incredible comeback of 13 positions, crossing the finish line in third position.

Ten Brinke is the true star of the weekend, both on dry and wet asphalt, with 5 victories, a second place and two best laps in the Heats. But Thomas' excellent personal results are only a part of the whole great performance by Vortex engines, protagonists of 13 victories over the heats: three first places for Josep Maria Martì (Tony Kart Racing Team), two for Laurens Van Hoepen (Ricky Flynn Motorsport) and Nikita Bedrin (Tony Kart Racing Team) and one for Marcus Kajak (Ward Racing).
In total, 6 of our engines reach the top ten of the final, 11 are in top 15.

Besides these results, Thomas Ten Brinke is the author of the best lap in the final, as well as Josep Maria Martì and Marcus Kajak, Conor Zilisch(Ward Racing), Jamie Day (Lennox Racing Team) and Karol Pasiewicz(Kosmic Kart Racing Department) who are centering many best laps too during the heats. Nikita Bedrin, on the other hand, gains the best lap in qualifying, which will be the best lap of the whole weekend in the OKJ class.

OK. Also in OK, our DST engines are leading players in excellent performances. Aboveall, the comeback of 13 positions by Harry Thompson (Ricky Flynn Motorsport), allowing him to conquer the third step of the podium and crowning a great performance where he also centers a best lap in the Heats and two seconds places.
Behind him is Kirill Small (Ward Racing), author of three best laps, three second and two third places in the Heats.

The other Vortex engine in top ten is the one powering Matheus Morgatto (Tony Kart Racing Team), ninth at the finishing line after good performances in the Qualifying Heats.
Joseph Turney (Tony Kart Racing Team), standing out in two heats, is as fast as unlucky during the Heats, but in final, he is the author of a brilliant comeback, overtaking twenty opponents and centering the best lap.
Among the winners of the heats, also Dino Beganovic (Ward Racing) who, besides the success, conquers two third places too.