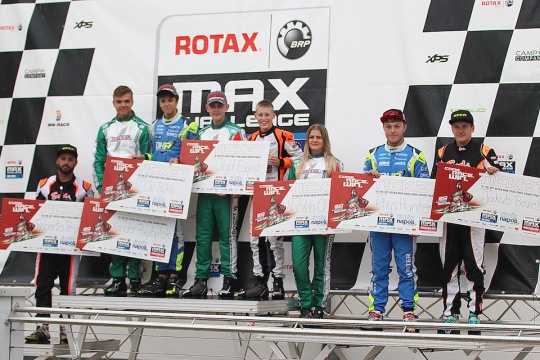 This was along with seven drivers claiming their place for the 20th running of the Rotax Max Challenge Grand Finals, which take place in Sarno this coming late October, despite a mixed bag of weather conditions trying to do its best to upset the general order of results in Wackersdorf.

Poland’s Oli Pylka was simply untouchable as the #202 from Dan Holland Racing posted the fastest time in qualifying practice, before staking his claim as a future Euro Trophy champion, having won both finals convincingly.

Mike Van Vugt (#217-NED-JJ Racing) made history in being the only driver to successfully defend his title, by ending up second in both finals, finishing ahead of Pylka in the overall standings, despite drama for the young Dutchman in qualifying.

The title aspirations of Strawberry Racing’s Wilgot Edqvist (#231-SWE) suffered a massive blow from the very start of the weekend, before both finals saw the youngster finally have his hopes dashed in the first final.

The Morin Racing Academy driver had suffered two penalties in the first race of the final day of racing, with an impossible task set for him in final number two. Edqvist would round out the final step of the championship podium, behind Van Vugt and Pylka.

Senior Max: Title remains in Sweden, as Olsson signs off in style.

Even with having secured the Senior max title on home turf back in Kristianstad, Mathilda Olsson (#301-SWE-Strawberry Racing) was not to be denied the top step of the podium for both the weekend results and the championship itself. The Uppsala-based driver would also have her fair share of trials after a difficult first day in both qualifying and the heats.

The UK’s Jason Lockwood (#315-GBR-KR Sport) gave everyone a surprise, having posted the best time in qualifying by just over two tenths of a second, whilst Rhys Hunter (#333-GBR-Dan Holland Racing) was the best-placed driver after an exciting set of qualifying heats.

Olsson would take command of the final racing day of the year, as the Swede would fight here way up and down the sharp end of the field in the first race, with there being multiple drivers being in the hunt for the penultimate race win of the campaign. Olsson would cross the line first, showcasing controlled aggression and great pace to finish in front of Rhys Hunter and fellow Strawberry Racing teammate, Scotland’s Lewis Gilbert (#329).
It was a Strawberry Racing 1-2 in the last race of the year, with Gilbert taking the top honours of a welcome race win, ahead of Olsson, with Hunter’s great consistency during the final day of racing helping him to take third, and more importantly, second in the standings, ahead of France’s Cézar Gaseau (#303-DAEMS Racing team), who took two sixth place finishes to complete the championship podium.

The battle between brothers Jakub Bezel (#401-CZE) and Petr Bezel (#402-CZE) would not take place at the final race weekend of the season, as points leader Petr coming into this round was under the microscope, due to previous technical non-compliance transgressions earlier in the year.

Jakub and KSCI Sodi Austria team mate Nico Joerg (#439-AUT) would also end up being excluded on technical grounds post-qualifying, whilst Petr was excluded from the remainder of the race meeting, quickly laying his chances of a European title to a sudden rest.

Bouvin Power’s Xander Przybylak (#422-BEL) was languishing behind the Bezel brothers, but would stake him claim on the title by racing to the top of the standings in the qualifying stages, before stamping his authority of proceedings in the first final.

But the Belgian would have to settle for second best in the weekend results and in the overall standings, as he would end up fifth in the second final, as Jakub Bezel would finish second behind eventual weekend winner, Denmark’s Christian Sorensen (#425), and with it, take the title.

Roberto Pesevski (#566-AUT) would keep his aim of the DD2 Masters clearly in sight, despite Rinaldo Grämiger (#527-SUI) being the fastest in qualifying. The Austrian, who had also won a full season entry to the Euro Trophy via the Open in Genk, along with an International Trophy ticket for Le Mans at Adria in June, did the treble by winning both races and with it, the title. .

This meant that KSCA Sodi Austria would take two titles this season, as Christophe Adams (#555-BEL-Team La Putrel) would end up second best in both the DD2 Masters weekend classification and the overall standings, finishing 17 points behind the new champion.

Outgoing champion Slawomir Muranski (#561-POL-46 Team), would not be able to make a repeat of the comeback last season, which saw him take the inaugural title, but the Polish driver would end up third in the weekend results, whilst Michael Becker (#526-GER-RS Competition), would take his place on the final step of the DD2 Masters overall podium.

All seven tickets to the 20th running of the Rotax Max Challenge Grand Finals, which take place at the Circuito Internazionale Napoli between October 19th and 26th, were handed out to the following drivers:

The Rotax Max Challenge Euro Trophy will return to the racetracks next Easter, as the “Home of Champions,” Belgium’s Karting Genk, hosts the first round of the forthcoming 2020 campaign, with more exciting racing on the cards.